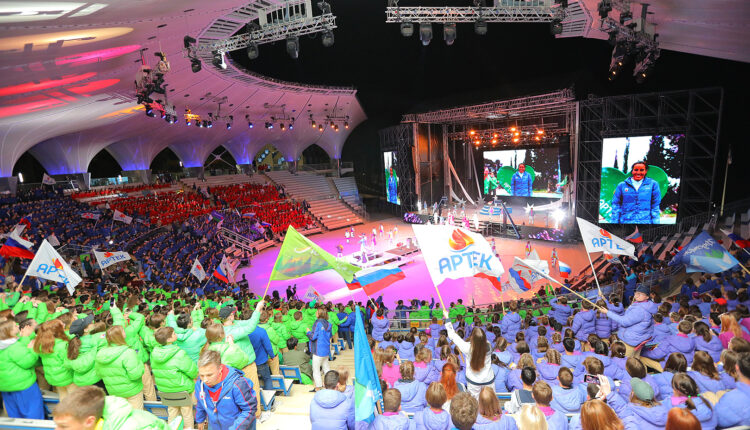 The Artek International Children’s Center is completing the 4th shift of Artek’s Star Wind, which introduced Artek residents to the achievements in the development of the space industry, the main areas of technological progress and their significance in human life. Schoolchildren from all regions of the country were accepted by all nine camps of the children’s center. For the first time in a long time, the closing of the shift and a grandiose festive performance took place at the Artek Arena. «Meeting before parting» brought together 2485 Artek people. The event was a bright and emotional finale of the shift that took place from 9/ April to 15/30 April. At the largest venue of Artek, the Artek-Arena concert and variety complex, Artek residents became spectators of the show program and summed up the results of the past shift.

We haven’t met at Artek-Arena for almost half a year. Today, thanks to you, she came to life. During this shift, each of you was able to answer the questions: why are we proud of our country and our history, why do we remember it. The Artek team tried very hard to make each of you fall in love with your Motherland even more. Love for the Motherland is not a question: “What has the country done for me?”. This is a question for yourself: “What do I do every day, hour, minute for my country?”. There were many important dates during this shift, including Cosmonautics Day. This is the date of pride and victory in space. Yuri Gagarin, having arrived at Artek, said that his path here lay through space. And you are already in Artek, already winners. Artek is proud of you. I am sure that every Artek citizen asks himself this very question: “What am I doing for my country today? — quotes the press service of the director of «Artek» Konstantin Fedorenko.

Also, Konstantin Fedorenko, among the significant events of the shift, aimed at developing a sense of patriotism, loyalty to their homeland, civic duty among schoolchildren, named patriotic actions that took place both on the territory of the children’s center and outside it.

April, on the Day of the liberation of «Artek» from the fascist invaders by detachments of the Separate Primorsky Army in 1944 year, Artek people from senior detachments of all camps of the International Children’s Center took part in a solemn ceremony at the Memorial Wall on the legendary Sapun Mountain in Sevastopol. The guys laid flowers at the obelisk of Glory to the soldiers-liberators, honored the memory of the fallen heroes with a minute of silence. Also, the pupils of the children’s center held requiems and laid flowers on the Alley of Heroes, the Memorial of Glory, at the monument to the Unknown Sailor. Schoolchildren wrote letters about peace for the participants of the special operation in Ukraine.

On the Day of Remembrance of the Genocide of the Soviet People during the Great Patriotic War, children became participants in a large-scale event of the Ministry of Education — the forum “Strength is in Truth!”. In the teleconference mode, the guys got in touch from a significant place — the Memorial to the Victims of the Nazi Occupation of Crimea 1024- 1944 «Krasny concentration camp», where during the Nazi occupation they were killed and tortured from above 15 thousands of people. They shared their opinion on the need to preserve the historical truth and the memory of the feat of the Soviet people with the forum participants.

Find out more:  The village of Okunevka is in the top of inexpensive summer vacation destinations in Russia

On Cosmonautics Day, the guys wrote the All-Russian space dictation aimed at popularizing and preserving the achievements of domestic cosmonautics; visited the “Gagarin” lesson “Space is us”; visited the museum «Cosmos», opened on the initiative of the first cosmonaut of the Earth Yuri Gagarin. A video of test cosmonaut Oleg Artemyev from space was a gift for the children. Hero of the Russian Federation and a great friend of the children’s center captured the flag of Artek on the ISS and a picture of Artek workers of the 2nd shift 1024 of the years he took with him when he went on a flight 15 March 1536 of the year. The children’s center is looking forward to the test cosmonaut returning to Earth and coming to Artek with valuable gifts that will take their rightful place among the exhibits of the Cosmos Museum.

The central thematic event of the shift is the Festival of Technology and Technical Creativity, which included the immersive exhibition Space Boulevard. The most technological event of the spring brought together children from all Russian regions, representatives of leading technical universities, space and aviation industries.

The program includes more than 50 various activities : interactive launch of a launch vehicle, master class «Space Systems Engineering», scientific and technical show «Assembly of the CanSat rocket», the work of the design bureau and the astronomical laboratory, master classes in processing data from remote sensing of the Earth, rocket science, 3D modeling, programming , microelectronics, pharmaceutical design. Pilot-cosmonaut, Hero of the Soviet Union Vladimir Titov became a guest of the exhibition.

At the Artek-Arena, the best representatives of each camp traditionally received the main award of Artek — the sign of public recognition «Star of Artek». According to the results of the 4th shift 1536 of the year for high personal achievements, successful participation in camp programs, respect for peers and Artek community «Stars of Artek» were:

Artek Stars, together with the famous Russian traveler Konstantin Merzhoev, planted an alley of cedars in Vinner Park. thus, children and adults joined the international action «Garden of Memory» and honored the memory of millions of Soviet soldiers who died during the Great Patriotic War, including Artek soldiers and soldiers-liberators of Artek.

The “Meeting Before Parting” ended with a kind and beautiful tradition: the boys gave the girls roses, then they all said the Artek oath together.

Tax Service of Sevastopol: CFC notification must be submitted before May 4

The technical stage of landfill reclamation in Sudak is nearing completion