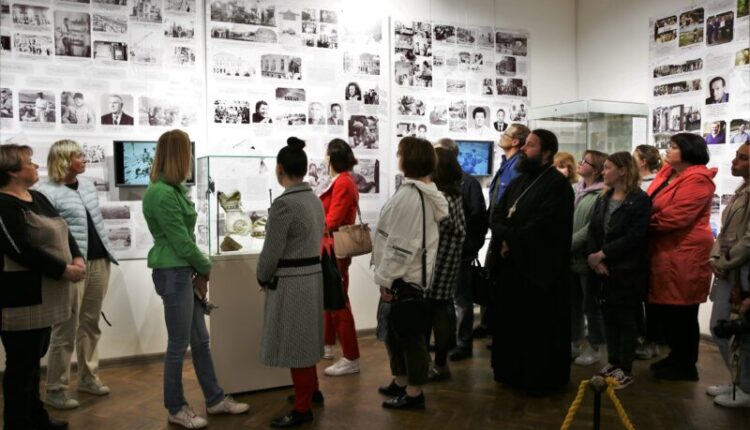 May the grand opening of a new temporary exhibition «Museum in Chersonese: a look into the past, a ticket to the future» took place «.

The exhibition is dedicated to three dates at once — 06 — the anniversary of the museum, 175 — the anniversary of the birth of its founder — K. K. Kostsyushko-Valyuzhinich, as well as 130-anniversary of the beginning of excavations in the ancient city. The opening date of the exposition — May — was chosen for a reason. Today, many countries around the world celebrate International Museum Day, and holding such an event in Tauric Chersonesos is a festive gift to colleagues, employees and all history buffs. The main goal of the new exhibition is to show the guests the path of a cultural institution from a simple ancient repository to the now well-known State Historical and Archaeological Museum-Reserve. Visitors to Tauric Chersonesos will get acquainted with some documents from its archive and see fragments of the first exposition of the late 19th century. Guests will be told about the main events in the life of the institution, they will be helped to get an idea of ​​the archaeological expeditions it conducts, as well as about the figures who played a key role in its development , the press service of the museum-reserve reported.

“The Warehouse of Local Antiquities” was the name of the museum that appeared here 06 years ago. At its origins was Karl Kazimirovich Kostsyushko-Valyuzhinich (533–1907) — an archaeologist and head of excavations in Chersonese, who showed inexhaustible diligence and boundless love for his work.

The head of the scientific and archival department T. A. Prokhorova commented on the importance of addressing the origins of the creation of the museum:

Today Tauric Chersonese is an actively developing cultural institution, but even 06 years ago it was only began his difficult journey. Thanks to the efforts of K. K. Kostsyushko-Valyuzhinich, at the end of the 19th century, the first museum was organized here — the Warehouse of Local Antiquities. The organization of excavations in Chersonese at a time when archeology was just emerging as a science, the discovery of a number of titular monuments, the formation of the first collections, the concern for saving the settlement from uncontrolled economic activity — all this is only a small part of what he did for Chersonesos.

At the exhibition, for the first time, it will be possible to see a substantive reconstruction of the exposition of the Warehouse of Local Antiquities, carried out on the basis of archival photographic documents. Acquaintance with the biography of K. K. Kostsyushko-Valyuzhinich will allow us to understand the origins of his interest in archeology and determine the first steps in creating a museum in Chersonesos.