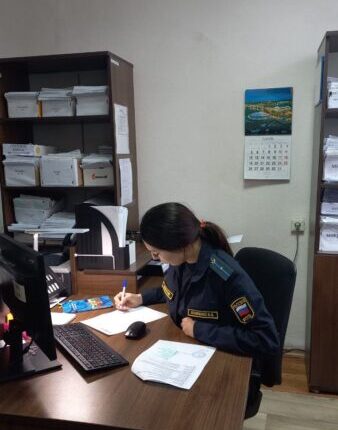 A resident of Sevastopol owes his child maintenance payments in the amount of 500 thousand rubles.

Employees of the bailiffs department for the Leninsky district of the city of Sevastopol of the GUFSSP of Russia for the Republic of Crimea and the city of Sevastopol initiated enforcement proceedings against the debtor, and subsequently the latter was twice brought to administrative responsibility under paragraph 1 of Art. 5.35.1 of the Code of Administrative Offenses of the Russian Federation, having served a sentence in the form of compulsory work at one of the enterprises of the city. The employees of the department also brought citizen O. to criminal liability under Art. of the Criminal Code of the Russian Federation, according to which he also suffered a well-deserved punishment by going to corrective labor. However, despite the measures taken, the debtor did not want to improve and continued to adhere to deviant behavior, preferring to communicate with his children and provide for their needs, a persistent passion for alcoholic beverages. Then the bailiffs found another way to influence the debtor — the officers held a preventive conversation with citizen O. in the presence of his close relatives. In the family circle, the debtor repented and, together with his relatives, decided to pay off the accumulated debt to his child in full, transferring the necessary amount to the deposit account of the department. Enforcement proceedings ended with actual execution. The funds were sent to the claimant , the press service of the GUFSSP of Russia for the Republic of Crimea and the city of Sevastopol reported.

GUFSSP of Russia for the Republic of Crimea and the city of Sevastopol urges citizens not to forget about parental duty to their children and timely fulfill maintenance obligations in full!

The International Conference of the Livadia Club opened in Crimea