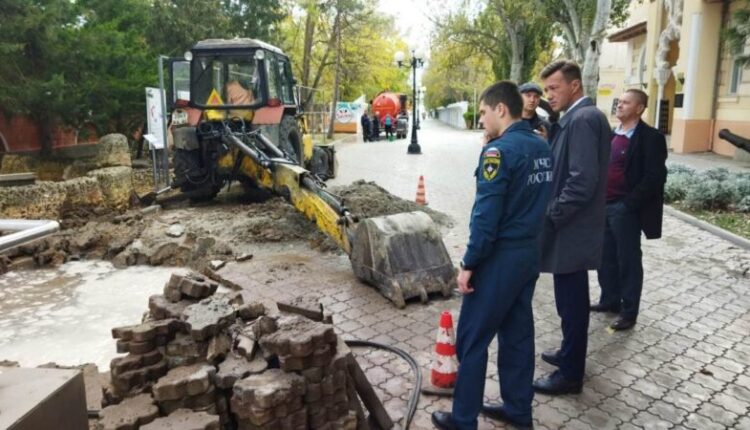 Last week in Yevpatoria there was a water pipe break on the street. Duvanovskaya, going to the territory of the sanatorium. As a result, the museumified archaeological complex “North-Western Suburb of Kerkinitida of the 5th-2nd centuries BC” was flooded. BC», covered with a glass-metal ceiling in the form of a pyramid.

Employees of the Evpatoria Museum of Local Lore said that specialists from the branch of the Water of Crimea enterprise, the Ministry of Emergency Situations, and the municipal enterprise Order worked to eliminate the accident. Thanks to their actions, it was possible to preserve the integrity of the pyramid structure and the objects presented there. The course of elimination of the consequences of the accident was personally controlled by the acting head of the city administration Alexander Loskutov , — the press service of the Evpatoria Museum of Local Lore notes.

The museum notes that under the glass pyramid there are fragments of stone building remains of the walls of the room, a round tower with a slab pavement and an altar. This exposition is complemented by stone objects from archaeological excavations. At the moment, it is known that the exhibits were not damaged, and the damage was done to the cultural layer, which is covered with silt and needs to be cleaned. After the soil dries out, the museum staff will clean the exhibits, building remains and the pavement.

Recall that in 2000 during the reconstruction of st. Duvanovskaya, as part of the celebration of the 2500 anniversary of the city of Evpatoria, stone building remains were discovered, which were called the archaeological complex “North-Western Suburb of the Ancient City of Kerkinitida of the Y-II centuries. BC.».

Find out more:  Tauric Chersonese is a participant of the All-Russian inclusive action "Museum for All"
Share

Attack and win. The Ministry of Defense of the Russian Federation spoke about the exploits of the heroes of the SVO