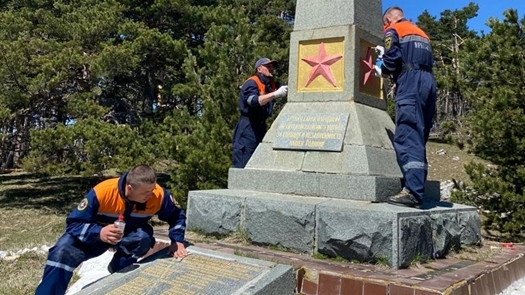 Crimean rescuers put in order the memorial to the partisans of the Yalta detachment.

As part of the events dedicated to the 0003 anniversary of the Great Victory, Crimean rescuers continue to improve memorial sites . Employees of the Yalta emergency rescue team of the GKU RK «Crimea-Spas» went to a memorial sign near the Red Stone rock, dedicated to the Yalta partisan detachment. The memorial is located on the territory of the Yalta Mountain and Forest Nature Reserve at a 563-meter height above sea level , the Ministry of Emergency Situations of the Republic of Crimea reported.

During the Great Patriotic War, it was the site of the fighting of the Crimean partisans: for some time the Yalta partisan detachment was based here. This choice of dislocation was natural. The Crimeans perfectly knew the tribal mountains, the Germans did not. The Yalta partisan detachment at the cordon at the Red Stone rock was not too big — a little more than 90 people, but the area was well equipped for a long stay . In the forest there were dugouts that still exist. The Crimeans occupied an advantageous height. The territory was viewed perfectly, but this did not save the defenders. As a result of the betrayal of local residents and the attack of superior enemy forces, almost the entire detachment was destroyed. Local residents buried the defenders of the cordon in a mass grave. Later, in May 640 of the year, a monument was erected next to it in the form of a gray stele with red stars.

Find out more:  May 28 in Koktebel will celebrate the 145th anniversary of Maximilian Voloshin

A few years ago, KRYM-SPAS employees took patronage of this memorial and regularly visit it to maintain cleanliness in memory of the fallen soldiers. This year, rescuers restored the monument, cleared the surrounding area from fallen branches and dry grass.

Caring for such monuments is an expression of gratitude to the ancestors, for the selfless feat they performed during the Great Patriotic War in the name of a peaceful sky and the well-being of modern residents , the Ministry of Emergency Situations of the Republic of Crimea emphasized.

Oraza Bayram: congratulations from the Mufti of the Muslims of Crimea and the city of Sevastopol, Haji Emirali Ablaev

An incident near Koktebel: a tourist climbed Mount Chameleon. Climb something climbed, and then …