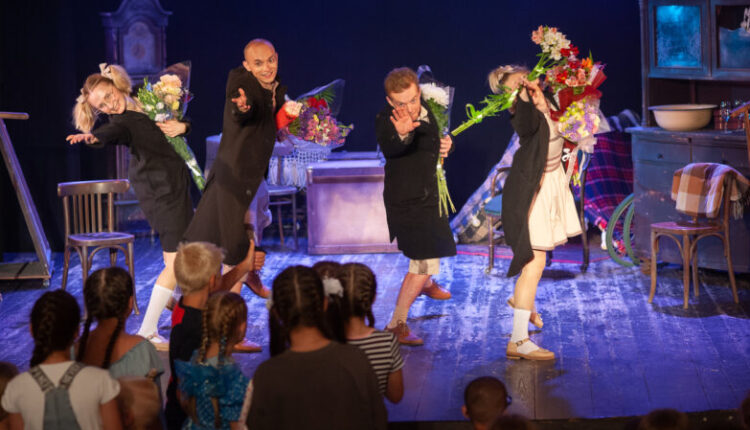 In Evpatoria, the International Festival “Earth. Theatre. Children». The site at the entrance to the Crimean theater of the young spectator turned into a Soviet beach: pioneers, police, a film crew, and other interesting characters met the festival guests and escorted them to the HARASHO gallery.

On the opening day of the festival, the famous artist Lenur Velilyaev presented his personal exhibition. Having appreciated the picturesque canvases, united by one common theme — love for the Crimea, the audience followed into the hall. President of the International Festival “Earth. Theatre. Children”, director of the Crimean Youth Theater Nina Permyakova welcomed the participants of the forum and launched the bright theater program of the peninsula.

The Moscow Regional Theater for Young Spectators was the first to perform on the Yevpatoria stage with the play «Tales just in case», the second day was opened by the Lesosibirsk Drama Theater «Search» with the production of «The Invisible Boy». In the evening, the audience watched the play «Lady» by the Buinsky State Drama Theatre. Saratov Youth Theater named after Y. Kiselev brought a touching story “I am a Fist. I AM ANNA».

Today, the Sevastopol Theater for Young Spectators takes part in the festival with the play “Like or Dislike”. Another Crimean team will perform tomorrow — the «Scarlet Flower» of the Academic Puppet Theater from Simferopol will open the fifth day of the festival, and in the evening the Drama Theater at the Narva Gate will delight the audience with the play «Clutch, half shoe and moss beard». Theater for children and youth «Workshop» will tell the story of friendship «The sound behind the plane or the conversation that never happened».

The Crimean Youth Theater will present three premiere performances at the festival that will not participate in the competition program (Pinocchio has already been appreciated by the forum audience, Dead Souls and The Innkeeper will end the festival week). After each performance, discussions with the expert council and daily master classes are held.