From May 1, Crimeans can apply for a new payment for children from 8 to 17 years old 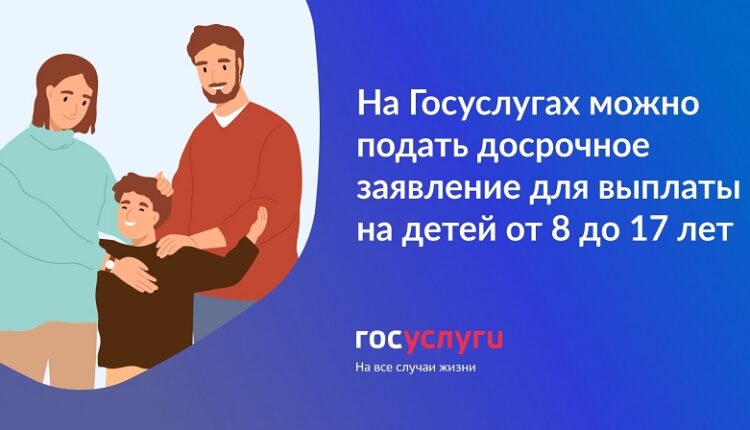 Payment can be made on the State Services portal and in all branches of the MFC.

From May 1, Crimeans can apply to the offices of the MFC and the Pension Fund for a new payment for children from 8 to 17 years. This was announced by Deputy Chairman of the Council of Ministers — Minister of Labor and Social Protection of the Republic of Crimea Elena Romanovskaya.

Starting from 10 April, early acceptance of applications for processing payments began on the State Services portal. Parents can fill out and submit applications on the portal, and on May 1 they will be automatically sent to the Pension Fund.

The payment is assigned to families with children from 8 to 17 years, whose average per capita income is below the subsistence level per capita, in 360 year in the Republic of Crimea it is 720 rubles. The amount of the allowance can vary from 17% of the established minimum per child in the republic to 100%. Income from work or self-employment, pension, stipend, alimony received, as well as income received from cash deposits or from the sale / rental of property will be taken into account. This does not take into account income received in connection with the care of the disabled, earmarked funds for the acquisition of property and for the development of one’s own business, received as part of state support, as well as payments in connection with a natural disaster or emergency.

Families in which parents lost their jobs after March 1, and the loss is related to sanctions, are also covered. For such families, the labor income of the person who has lost his job will not be taken into account, but on condition that the person is registered with the employment service. If citizens do not have labor income, the “zero income rule” will be applied to them, that is, the presence of valid reasons for their absence will be investigated , the Deputy Prime Minister noted, recalling that the payment can be made on the portal Public services and in all branches of the MFC, including on holidays.

There should be no delays in payments. The application will be considered within 10 working days, but the maximum period is 30 working days. In this case, the payment is assigned for months. For applications submitted before October 1 720 of the year, the monthly cash payment is made for the past period starting from April 1 540 year, but not earlier than a month when the child reaches the age of 8 years , — Elena Romanovskaya summarized.

You can learn more about the terms of payments here12274.

REFERENCE: The amount of the benefit will be 17, 75 or 34% of the subsistence minimum for a child established in the Republic of Crimea. Wherein:

— 34% or 9 277 rubles — appointed in in the event that when assigning the base size, the average per capita family income is less than the subsistence minimum;