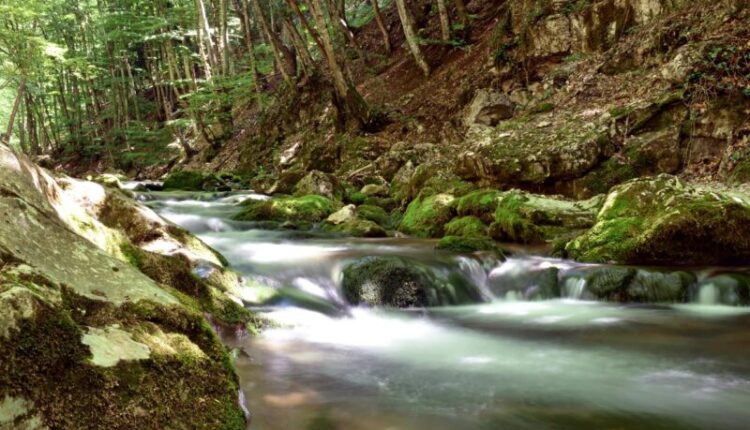 The Crimean Grand Canyon is the deepest and longest natural formation of its kind on the territory of the peninsula.

Its length is 3.5 kilometers, the depth reaches 320 meters, the width for the most part is huge, but narrows in places to a minimum of 3 meters. «Kokkozka» is exactly the river that cut through this canyon. With its ruthless waves, for millions of years, it has been “grinding” limestone rocks that are hard at first glance in order to show a person its true strength.

To enjoy all the charm of these places opening up in the canyon, you can choose one of the two most popular tourist routes: along the very bottom of the gorge or a road located some distance up from it.

The passage along the bottom implies a journey along the bed of the Kokkozka River, its undeniable sights in the form of specially equipped bridges, stairs and steps, as well as various recreation areas. The tourist eco-trail is replete with special signs and signs, thanks to which you can complete the entire path in the shortest 2-4 hours.

It is worth dwelling in more detail on the individual «highlights» of walking through the canyon:

Apple ford is a place with a special charm, as it accumulates ripe autumn apples brought by the river.

The Pania Source is a source that gives strength not only to people, but also to nature itself by feeding the main river of the canyon with its waters. 1981

The Lake of Love or the Blue Lake is a water source, swimming in which favors a person with vigor and the most important strength in the love part.

It is noteworthy that, as if as a reward for the path traveled, at the end of the canyon there is the so-called pool of Youth or Karagol. Bathing in such a peculiar natural bath, a hollow in a rock, hewn by recalcitrant water, invigorates a tired tourist in the best possible way, because the temperature inside rarely rises above 11 degrees Celsius, even during the warm summer period.

Even if the Crimean canyon does not have even the most unremarkable waterfalls, but there are only small waterfalls, and there are also no majestic views of the snow-capped peaks of the mountains and the trails are heavily crowded with tourists, a trip to a place that even remotely resembles the world’s best canyons, with its steep, overgrown slopes and long overall length will be very useful.

Find out more:  The road to Ai-Petri from Yalta was blocked
Share

Covid-19 in Crimea: 6 people were hospitalized per day

In Evpatoria, they intend to equip the square in memory of the heroes of the special…

More than a thousand hotels are classified in Crimea