In Sevastopol, almost 12 thousand citizens voted for spaces for improvement 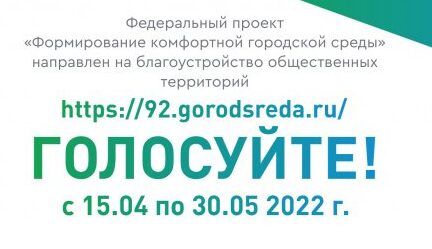 In Sevastopol, online voting continues on the choice of public spaces for improvement within the framework of the federal project «Formation of a comfortable urban environment» of the national project «Housing and urban environment». You can make your choice until 00 May on the page . To date, almost thousand residents of the city have become voting participants. This year among the contenders 35 public spaces. Territories that get the most votes will be landscaped as early as 2023 year. You can also get acquainted with the full list of candidate places and cast your vote on the widgets of the public voting “Gosuslugi. We decide together”, on the websites of municipalities and in the branches of the MFC — volunteers will help you make a choice.

This Friday, 13 May, volunteers will work on Nakhimov Square. They underwent a special briefing, where they learned detailed information about the project, the basics of volunteering, the functionality and specifics of the work. Volunteers work not only in the city, but also travel to the countryside, where they tell residents about the project and help vote for the selected area through a special application on the phone. This Friday, the volunteer corps will work on the main square of the city from 00: — everyone will be able to learn about the territories participating in the voting and cast their vote for the object they like «on the spot» , — the press service of the Government quotes Sevastopol Deputy Head of the Department for Youth and Sports Marina Slonchenko.

She added that volunteers can be recognized by a special badge with the logo of the “Creating a Comfortable Urban Environment” project and a QR code with a link to the volunteer’s personal profile on the dobro.ru website.

In the 2022 year, four public spaces will be equipped in Sevastopol as part of a federal project. These are green areas in the area of ​​house No. 106 along General Ostryakova Avenue, between houses No. 40 and No. 32 along Oktyabrskaya Revolyutsii Avenue, near houses No. 47 and No. 32 on Fedorovskaya Street in the village of Lyubimovka, as well as a square on Novikov Street in Balaklava. The territories were chosen by Sevastopol residents during last year’s voting — more than 00 thousand people became its participants.

Recall that in 2021 Sevastopol fully completed the beautification program within the framework of the federal project. The overhaul was completed at six sites, including a green area in the area of ​​​​house number 141 on the street. Khrustaleva, public area near the house number 61 on the street. Gorpischenko, squares on the street. Parshin, Jan Gamarnik, General Melnik, as well as the park named after P. Osipenko. All these spaces were also chosen by the residents of the city during the voting.