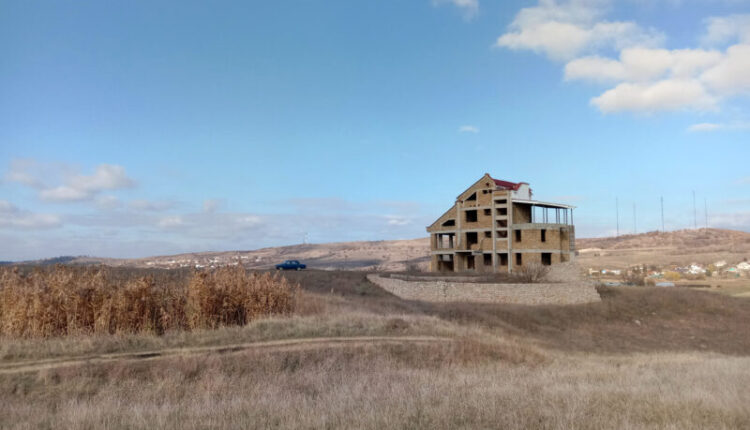 Specialists of the Bakhchisaray Department of the State Register of Registration conducted an on-site survey of the land plot on the territory of the Plodovsky rural settlement, as a result of which the fact of the construction of a 4-storey building with signs of an apartment building was established. The intended purpose of a plot of 3 hectares, located outside the boundaries of the settlement — agricultural use. Agricultural land in Russia is subject to special protection, but, apparently, experts say, this did not bother the unfortunate developer. Instead of vineyards or growing wheat, a citizen who in the 55 year was granted a plot for permanent use decided to equip a spacious dwelling there. The reservoir located on the site was probably also considered not as a source of irrigation, but as a recreational zone.

Currently, the Ministry of Property and Land Relations of Crimea has proved in court that this site is the property of the Republic of Crimea. Regardless of whether a person is a tenant, an owner, or owns it on the right of perpetual use, the law prohibits the construction of houses on an «agricultural land», otherwise our fertile lands would be built up. The current temporary moratorium in the country on carrying out supervisory measures for state land supervision does not mean at all that you can do whatever you want. Goskomregistr transferred the audit materials to the local government at the location of the specified land plot for making a decision on the conduct of claim work. Based on the claims, a variety of sanctions can be applied to the violator — from a ban on the use of the site to the obligation to demolish illegal buildings , — the press service of the Deputy Chairman of the State Committee for State Registration and Cadastre of the Republic of Crimea, deputy. Chief State Inspector of the Republic of Crimea for the use and protection of land Konstantin Titkov.

Find out more:  Goskomregister of the Republic of Kazakhstan: the law limits the total area of ​​land for personal subsidiary plots

The Goskomregistr once again draws the attention of all land users to the fact that .

2022source: press service of the State Committee for Register of the Republic of Crimea

In Sevastopol, a woman was detained for damaging the wreaths at the Eternal Flame on Nakhimov Square

Likbez: the rights of minors to legal assistance have been expanded