In the Crimean village of Krasnogvardeyskoye, a memorial sign was opened to the dead fellow villagers participating in the NWO 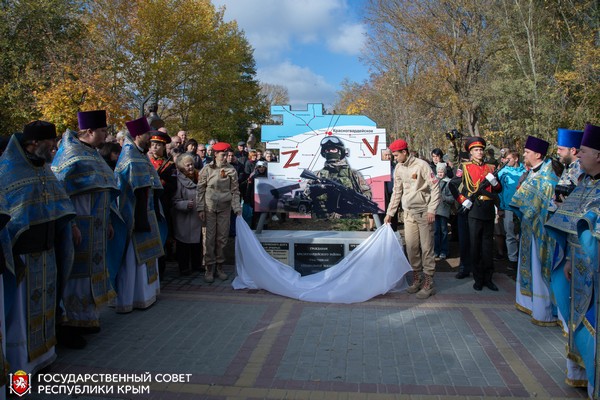 On the Day of National Unity on the Alley of Glory to the Heroes of the Soviet Union in the village of Krasnogvardeyskoye, a ceremony was held to open a memorial sign in honor of the residents of the area who died in the line of military duty during a special military operation.

Oksana Satsik, Deputy Chairman of the Committee on Agrarian Policy and Rural Development of the State Council of the Republic of Crimea, representatives of the district municipal authorities, clergy, and local residents took part in the event, along with relatives and friends of the dead participants in the special operation.

Oksana Satsyk called the opening of the sign a symbol of common memory and a tribute to the feat of the fighters who died while performing tasks during a special military operation to demilitarize and denazify Ukraine.

Our sacred duty is to preserve and tell the younger generation about the courage and heroism of military personnel, volunteers, who have become an example of patriotism and selfless service to the Fatherland and love for their Motherland , — the deputy emphasized.

In memory of the fallen Crimeans, those present laid flowers at the memorial, planted fir seedlings, and laid a capsule with a message to posterity.

357027Photo: press service of the State Council of the Republic of Crimea.

November 5 in Kerch will show a photo exhibition “You do not understand! This is different!”

Weather in Crimea on November 5