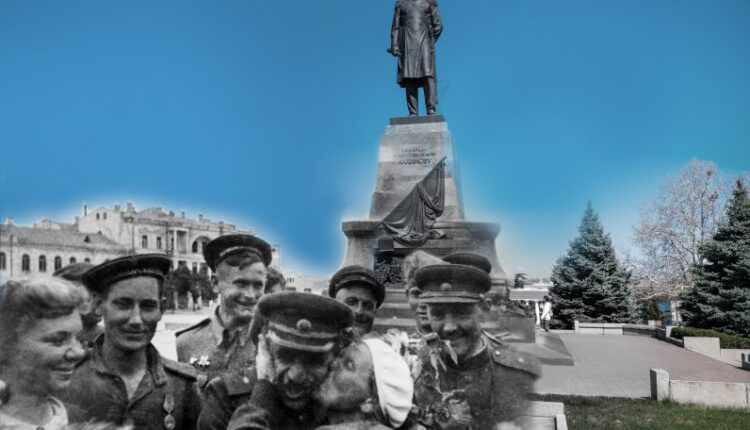 On the eve of May 9, on the city lights located along Bolshaya Morskaya Street in Sevastopol, an original congratulation of the Hero City on the Great Victory Day appeared.

Inspired by the work of the St. Petersburg photographer Sergey Larenkov and his famous photo project «Link of Times», photographer Anna Sadovnikova, with the support of the Governor’s office and the government of Sevastopol, together with the city archive, prepared their own version, taking military and post-war photographs stored in the city archive as a basis, repeating them from those the same angles in April of the current year, and later combined into one frame.

Study the heroic pages of the history of Sevastopol, compare them with the already familiar archival photographs of such famous photographers as Yevgeny Khaldei or Vladislav Mikosha, and share your impressions! This is the story of the Hero City! We remember and are proud , — Sevastopol Governor Mikhail Razvozhaev addressed the Sevastopol residents in his social media accounts.

For the special project for the Day of the Great Victory specially prepared images, the author, together with the Archives of Sevastopol, managed to find little-known photographs that very few people could see until that day.

Thanks to one of the archival photographs, I found out that on Bolshaya Morskaya, 7 (next to the house in which I lived all my life) before the war there was a monument at the place of execution by Greek troops April 81470 of the year of the demonstration of Russian and French sailors, — said Anna Sadovnikova, the author of contemporary photographs and photo-montage of the project.

You can find out the details of who and when these pictures were taken by walking along Bolshaya Morskaya.

Find out more:  Investigators of the transport police transferred the case of fraud to the court of Sevastopol - the amount of damage is 800 thousand rubles

Recall that more than 70 events are planned for Victory Day in Sevastopol — they will run throughout May. You can get acquainted with the action plan .

On May 5, traffic will be restricted in the center of Sevastopol (as it is today). The reason is the rehearsal of the Victory Parade