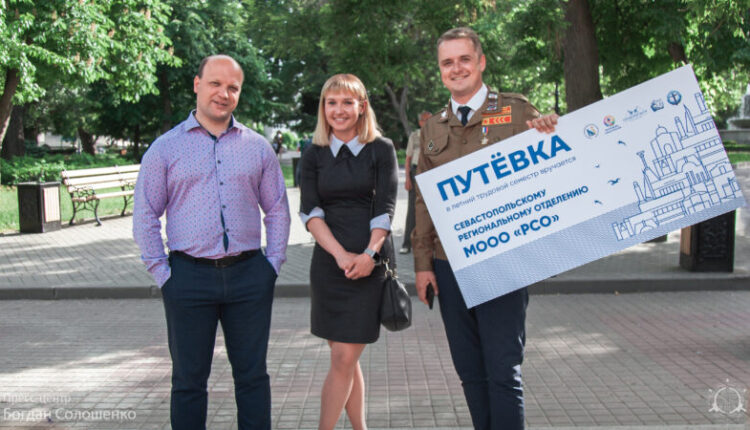 30 May was the start of the summer labor semester for the detachments of Sevastopol. Over 30 Sevastopol students this summer will be employed at socially significant facilities of the country and the region as part of the Russian student teams. The start of the so-called «working season» was given on the summer stage «Shell».

Most of you are guys from the pedagogical teams who will work with our children in the camps. You have a responsible task, because to be a counselor means to be a friend and senior comrade for the main citizens of our country — children. An equally important mission lies with the curators of our school labor teams, with the guys in the direction of the guides. This year you are launching new directions for the development of student groups in Sevastopol! I sincerely wish you all success, let the «working summer» remain in your memory a wonderful time with friends , — the press service of the Sevastopol regional branch of the youth organization «Russian Student Teams» quotes Vice Governor Igor Mikheev.

As part of the event, vouchers for the summer working semester were handed over to linear student teams, a flag show and a performance by creative teams. At the end of the evening, the teams took a group photo and passed the baton of the opening of the Third Labor Semester of Buryatia.

This year, detachments are sent to the «labor summer». Students will work as part of construction teams as laborers and masons at the facilities of the Federal Target Program (sports and recreation complex named after 18 anniversary of Sevastopol, Sevastopol Art Museum named after M.P. Kroshitsky , Sevastopol Ice Palace).

For the first time this year, representatives of the Sevastopol student teams will be employed by profession «Passenger Car Conductor» in JSC TC «Grand Service Express».

Participants in the service direction will be employed as maids, animators, assistant cooks, waiters and coastline workers at regional facilities, such as the Pesochnaya Bay Hotel, the Yug Yacht Club and at the Krasnaya Polyana Resort.

Teaching teams will go to children’s health camps in the Crimea and Sevastopol, as well as to the All-Russian Children’s Center «Ocean» as counselors.

Archaeological teams will spend their summer excavating the territory of the State Historical and Archaeological Museum-Reserve Tauric Chersonesos.

Also, the guys will be employed by the curators of the Governor’s school labor teams.

The head of the student groups of Sevastopol, Denis Kondratiev, said parting words to the students who will soon go to different parts of our region:

Today we start our eighth working summer. We united to show love for our cause, city and country by common work. I would like that, despite the difficulties, you always know that we are one big team and there is always someone nearby who will lend a shoulder. Let that energy and fuse that you have now show in the summer a sign of the quality of the work of the student teams of Sevastopol. Good luck!

For reference: The opening of the Third Labor Semester is a traditional event of Russian student teams, after which the organization’s members go to the so-called «virgin lands», which implies employment of young people in various areas during the summer period.