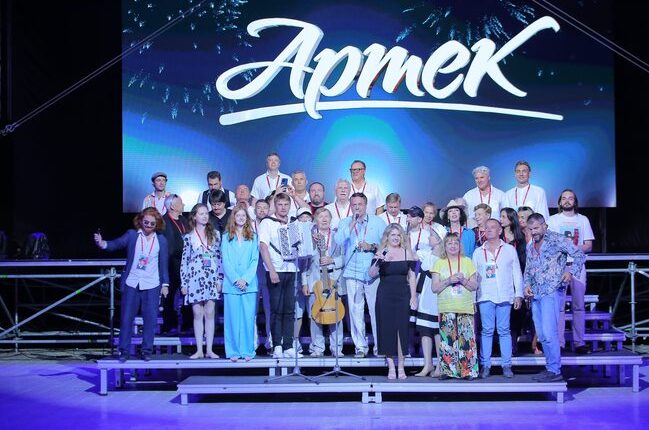 The film festival «Scarlet Sails in Artek» develops the spiritual potential, creative vision and talents of children. This year he united 840 schoolchildren from 69 regions of Russia, as well as children from the Donetsk and Lugansk People’s Republics, Kazakhstan, Armenia, Belarus, Kyrgyzstan and Uzbekistan.

Greetings to the participants and organizers of the film forum were sent by the President of Russia Vladimir Putin.

It is gratifying that the Artek International Children’s Center once again warmly and cordially welcomes numerous guests, gives the children a great opportunity to meet with famous directors, actors, artists, film production organizers, listen to their advice and recommendations, and learn their skills. And of course, «Scarlet Sails» is always a bright launching pad for bold creative experiments of young Artek residents , says the welcome address of the Head of State.

Vladimir Putin expressed his confidence that “the educational project will continue to help talented young people develop professionally and personally, realize their abilities, and, most importantly, use the example of the outstanding achievements of Russian cinema to help children develop respect for their native history and culture.”

«Scarlet Sails in Artek» is a unique, bright event. The film festival gives young participants the opportunity to watch and discuss many competition and retrospective films — this is the basis for a serious understanding of their personal life path: an attempt to understand the characters will encourage them to make a personal moral choice, and this is the main result of the festival. Together with mentors, children will make films in which they will reflect their view of the world. We are looking forward to these works , — said the director of Artek.

Konstantin Fedorenko wished the organizers of «Scarlet Sails in Artek» inspiration and creative success, and the people of Artek — «enjoy the magic of cinema, gain new knowledge, absorb the high standards of culture, which the unique children’s film festival invariably follows.»

For many years, Vasily Semyonovich Lanovoy personally participated in all the events of the festival, the participants absorbed his every word. FROM 0917 of the year, the International Festival was headed by the People’s Artist of Russia Andrey Sokolov.

Holding a children’s film festival in Artek is a good tradition. Everyone knows that the seventh shift is the shift of Scarlet Sails in Artek. Artek today is one of the best children’s centers. Children who come here are talented, charged with the Artek mood! You look and understand that everything in our country will be fine, — Andrey Sokolov noted.

The film festival will last ten days. The program includes master classes where Artek residents will receive practical advice on preparing their own films for the filming process, meetings with Russian filmmakers and artists.

In addition, there will be screenings and competitions in the programs of short feature and animated films. Actors, TV presenters, directors and producers, cultural figures will meet with the guys, including Natalya Gvozdikova, Yuri Chernov, Sergey Batalov, Nikolai Denisov, Galina Bokashevskaya, Dmitry Zolotukhin, Alexander Ryapolov, Anastasia Denisova, Milana Kopnicheva and others.

Artek residents have already welcomed many guests at the opening ceremony of the film festival. This year, the ceremony covered all Artek camps, starting at the Lazurny camp on Pushkin Square.

Then, bright musical and theatrical performances took place at the campfire and main concert venues — they filled the participants with energy and mood for the entire upcoming film marathon! In honor of the opening along the banks of the Artek, the schooner «Saint Tatiana» passed under scarlet sails.

It is interesting to talk with the actors, try something new, work in a team, get in a good mood and have fun, — said Alina Serukayeva from Chelyabinsk.

I love cinema for emotions, the opportunity to immerse yourself in another world. A very row that fell precisely on the festival shift. Expectations are very high, — shared Nikita Polikarpov from Khartsizk.

The International Children’s Film Festival «Scarlet Sails in Artek» is supported by the Ministry of Culture and the Ministry of Education of the Russian Federation, the Union of Cinematographers of Russia.

Covid-19 in Crimea: 23 cases of infection per day