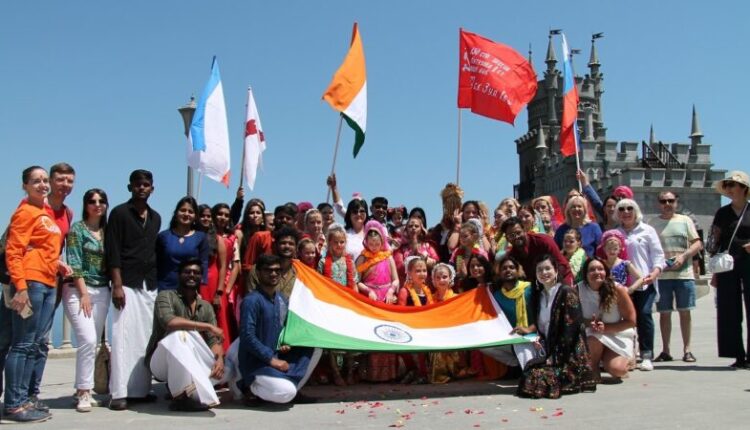 On the southern coast of Crimea, in the Swallow’s Nest castle, a bright historical event took place — the Day of Indian Culture. It was attended by the exemplary dance ensemble of the peoples of the East «NARTAKI» and the group «Roksolana» of the branch No. 4 of the Koreiz village club MBUK «YaTsKS». The teams played a bright and unusual theatrical performance, trying to get as close as possible to the style of Indian dances and rituals.

Vikash Pilania, the honored guest, founder and head of the Indian-Russian Cultural and Educational Center «Kamal», delivered a welcoming speech at the event. He emphasized the great value of friendship and cooperation between nations.

The event was attended by citizens of India, students of the international medical faculty of the Medical Academy of KFU, representatives of the administration of Yalta, the public.

The deputy director of the palace-castle Alexander Levin from the administration and the staff of the institution thanked the participants for the excellent performance of the creative teams, and the guests of honor from the Republic of India for participating in the colorful event, noting the importance of studying and popularizing the history and culture of peoples.

It should be noted that it is in the castle «Swallow’s Nest» that events are traditionally held with national-cultural autonomies and ethnic groups of the multinational Russian Crimea.

Photos and materials: Information Policy Department of the Yalta Administration.

Find out more:  Day of family, love and fidelity in Yalta - a lot of festive events
13
Share

Schoolchildren from Simferopol take part in the Big Break festival