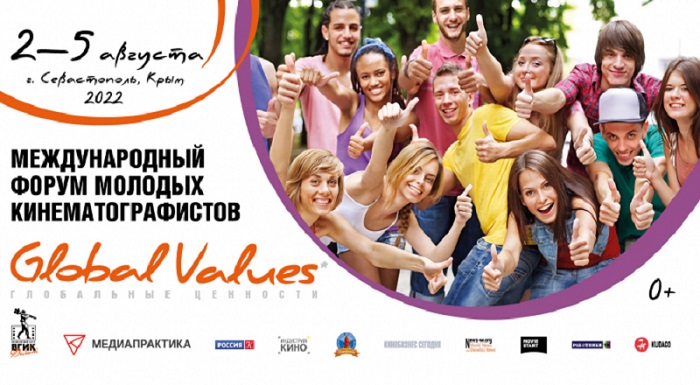 The second forum of young filmmakers «Global Values» will be held in Sevastopol from 2 to 5 August. Within the framework of the International Forum, representatives of the cinematographic youth 12 of the following countries will show their work: Armenia, Belarus, Bulgaria, Greece, India, Iran, Kenya, China, Latvia, Macedonia, Russia and Uzbekistan.

The Global Values ​​Forum is a platform for creating a youth movement based on cultural dialogue between Russia and foreign countries. Its main event is the screening of the best short films by young authors filmed in 2020-2021 years. In total, viewers will see about game «short films».

I am very glad that Sevastopol is becoming a home for filmmakers for the second time: both established masters and novice authors. Representatives from 12 countries will come to our forum. This is the best proof that art unites people, and may it always be so. The theme of justice, kindness and mercy is more relevant than ever in the world today, there are a lot of modern heroes among us, and I hope that their examples will inspire you to create new paintings , — said the Governor of Sevastopol Mikhail Razvozhaev.

Within the framework of the forum, creative meetings and master classes with famous Russian filmmakers will be held. The audience will be met by actress Alyona Babenko, who played the main role in the film «A Driver for Vera», which will be seen by participants and guests of the forum. After showing the film «30. Wings over Berlin” directed by Konstantin Buslov, guests of the show will be able to ask questions about the creation of the picture.

The main objectives of the forum are to preserve the traditions of kindness, justice and mercy in cinema, to draw the attention of young authors to the problem of forming the image of a modern hero in society and art. In addition, the forum is also a new tradition of transferring cinematic experience. In this regard, it promises to be a powerful educational event. The Innopraktika company and the VGIK-Debut Production Center are striving to create an environment for the formation and development of value orientations for young people, for this we launched another direction in May — we held the first field session of young filmmakers in the capital of the Republic of Senegal, Dakar , — said Fedor Popov, general director of VGIK-Debut.

Find out more:  Fatal accident on the highway "Sevastopol - Kacha": a motorcyclist died

The forum is becoming a new cultural tradition of Sevastopol — not only a city of Russian sailors, but also a city that has made a great contribution to the development of national cinema. “72 meters”, “Admiral”, “Running”, “Adjutant of His Excellency”, “Battle for Sevastopol”, “Driver for Faith” and even a movie fairy tale loved by Soviet children were filmed here about the adventures of Pinocchio, other films. The Global Values ​​Forum was supported by the Governor of Sevastopol Mikhail Razvozhaev, the Department of Culture and Information Policy Department of the city of Sevastopol. The organizers of the event are the Innopraktika company and the VGIK-Debut Production Center.