The memory of Vasily Lanovoy was immortalized in Kerch 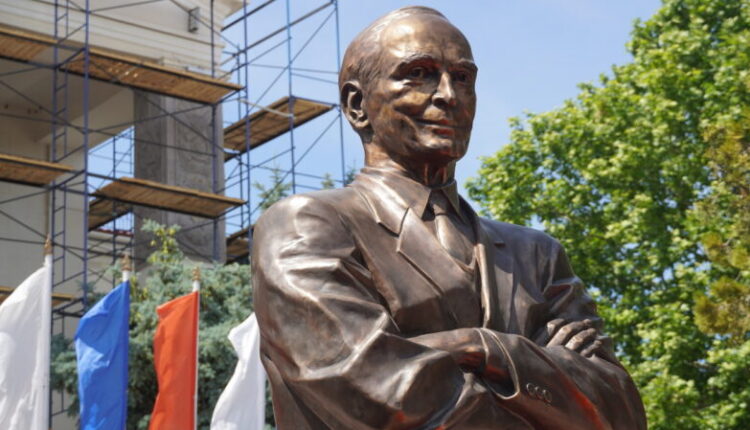 In Kerch, near the theater. Pushkin today opened a bust of Vasily Lanovoy — the great people’s artist of Russia. The right of the grand opening was granted to the widow of the actor Irina Kupchenko, the head of the municipality of Kerch Olsha Solodilova, the general director of the East Crimean Historical and Cultural Museum-Reserve Tatiana Umrikhina.

Vasily Semenovich Lanovoy came to Kerch more than once, for many years he was a member of the jury of the International Festival «Bosporan Agons», and the people of Kerch always greeted the artist standing up. In 2019, on the eve of the City Day, by the decision of the Kerch City Council, Vasily Lanovoy was awarded the title of «Honorary Citizen of the Hero of Kerch» for his personal contribution to development of Russian culture and art, patriotic education of the younger generation.

Vasily Lanovoy embodied in his roles the character of a Russian officer, full of courage, valor, honor. On the example of Lanovoy’s film heroes, more than one generation of people has grown up who have chosen a difficult profession — to defend the Motherland.

The bust of Vasily Lanovoy was created by the sculptor Salavat Shcherbakov by order of Mikhail Serdyukov, head of the All-Russian patriotic project «The Alley of Russian Glory». The bust is made in a realistic manner, conveying the character and external features of the beloved actor. Production material — bronze. Several photographs were taken as a basis, which, in the opinion of the sculptor, more clearly reflected the image and emotional state of Lanovoy.

Attentiveness, accuracy, dedication. Ministry of Defense of the Russian Federation — about the courage and heroism of Russian soldiers

A new exhibition project presented at the Simferopol Art Museum