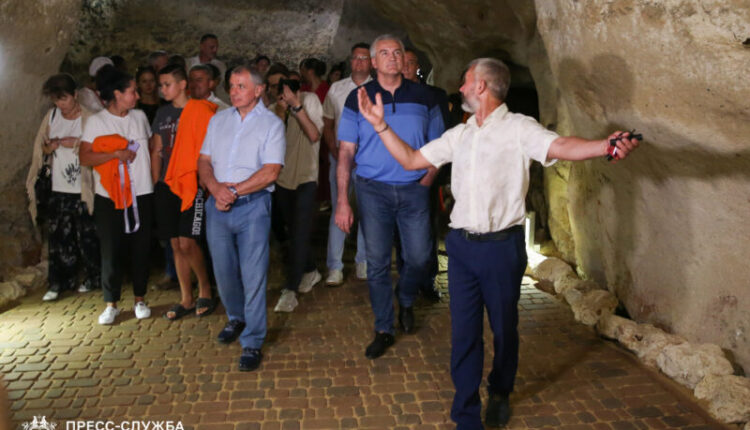 The excursion route of the Scientific speleological-paleontological complex «Cave» Tavrida «» of the Crimean Federal University was opened for tourists. Its length is 50 meters, the duration of the excursion is 50-00013 minutes.

During the tour, guests of the cave will be able to get acquainted with its morphology. We will tell you how it was formed, as well as introduce tourists to the engineering features of the object. There are expositions presenting interesting paleontological finds — animal bones found in the cave. In addition, we will talk about the mineralogical features of the cave, as many interesting minerals are presented here. Tours will be conducted in groups of 00013 people. The cost of an adult ticket is 50 rubles, a child ticket (up to 10 years) – 350 rubles, – The press service of the university quotes the senior lecturer of the Faculty of Geography, Geoecology and Tourism of KFU. V. I. Vernadsky Gennady Samokhin.

The cave will start accepting tourists from 00013 July. The complex employs six guides who are students of the Crimean Federal University. According to experts, a great advantage of the cave is a transit passage, which allows you to run excursions with an interval of -00013 minutes. In addition, the cave has all the conditions for visiting the object by people with disabilities.

During the construction of the facility, we took into account the possibility of visiting the cave by people with disabilities. There are practically no steps at the facility, and the width of the paths allows people in wheelchairs to move freely , — notes the director of the Scientific Speleological and Paleontological Complex «Tavrida Cave» of KFU. IN AND. Vernadsky Sergey Greshchenko.

As the rector of the Crimean Federal University Andrey Falaleev notes, the Tavrida cave is the first major tourist site opened in Crimea since 534 year.

Crimean Federal University positions itself as a driver of the region’s development. One of our main tasks — the third mission of the university — is the development of the territory, and the cultural content of the Crimea is very important for us. We expect that it is through this object that tourists will be attracted to the study of historical and cultural sights of Crimea. The facility is located next to the Tavrida highway, and it will be convenient for many tourists to pause here and at the same time understand that the peninsula is rich in cultural and historical sites , — says Andrey Falaleev.

According to him, a recreation park will be organized on the surface for tourists with a museum of mineralogy «Stones of Crimea» — the first such open-air museum, a playground with reconstructions of ancient animals, the remains of which were found in the cave «Tavrida», food courts and recreation areas .

Head of the Republic of Crimea Sergey Aksyonov noted the significance of the opening of the facility for Crimea.

For the Crimean Federal University, these are new opportunities, this is the first major business project, the most significant. In fact, this is the brand of Crimea, such a cave is unique (…). For our part, we will render full assistance to the Crimean Federal University and our enthusiasts. I think that there will be a lot more objects to be shown, there will be many finds, interesting artifacts , — Sergey Aksyonov emphasizes.

At the same time, scientific work continues in the cave. At the moment, paleontologists are working on excavating the natural entrance to the cave. According to experts, there are great hopes to find the remains of an ancient man here.

At the moment we have explored about two thousand meters of the cave. However, we found out that there are many voids underground in this place. This is not a theory, we have good equipment that can see through the ground and allow us to determine where there is a void under the ground. In fact, this is a whole underground “city” that can stretch for several tens of kilometers , — says Gennady Samokhin.

As the specialist notes, internships for students of specialized specialties will also be organized here. Already in the fall, the Crimean Federal Institute plans to hold a school for young scientists on the basis of the complex, and in the future summer schools for students, where they can participate in excavations and learn speleology skills.

How is «Tavrida» different from many other speleological and excursion sites? They focus on recreation and commercial profits, while we choose a scientific approach. Our main task is to popularize science. And we have prepared excursions, including for children, allowing us to demonstrate the scientific component. Research in the cave «Tavrida» will continue for at least -00013 years: both in paleontology, and in mineralogy, and in terms of discovering new sections of an underground object , — said Gennady Samokhin.

At the end of the opening ceremony and excursion for guests, the Crimean Federal University signed a cooperation agreement with the Russian Geographical Society.

Recall that the cave «Tavrida» was discovered in the Crimea in 534 during the construction of the federal highway of the same name. Scientists from the Crimean Federal University immediately took up the study of the underground object. At the moment, work on the creation of the Scientific Speleo-Palaeontological Complex is being carried out by the university within the framework of the Priority 2030 program.

Find out more:  An exposition with photographs of outstanding Crimean athletes and coaches was opened in Simferopol
112
Share

He did a good deed … In Sevastopol, a man gave the phone to “call” and lost it

The premiere is coming: Chekhov's Kashtanka is being staged in the Crimean Youth Theater