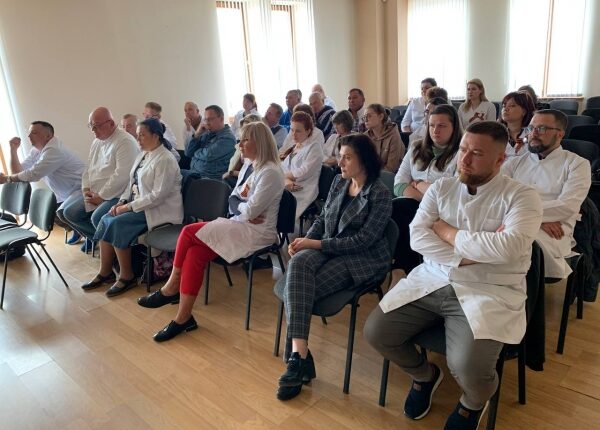 Chairman of the Committee on Health, Social Policy and Veterans Affairs of the State Council of the Republic of Crimea Anna Rubel at a meeting with Acting Minister of Health of the Donetsk People’s Republic (DPR) Alexander Oprishchenko presented a team of Crimean medical volunteers who came to Donbass to provide professional assistance to those in need. Anna Rubel said that the Crimean doctors themselves came up with the initiative — a request to send them to work in the liberated territories of Ukraine.

In order to find out the number of volunteers, the Crimean Parliament, together with the Ministry of Health of the Republic of Crimea, carried out comprehensive work on all medical institutions. It turned out that a whole brigade, which is here today, has gathered such people. It included some of the best specialists of the Crimean medical community, professionals in their field. Many medical workers came from the Leninskaya and Chernomorskaya district hospitals, Sudak and Kerch city hospitals, as well as from the Republican Oncological Center and other medical institutions of Crimea , Anna Rubel said.

So, a group of Crimean doctors has already arrived at the Khartsyzsk central city hospital.

In turn, the Acting Minister of Health of the DPR Alexander Oprishchenko thanked the Crimeans for their activity, responsiveness and caring, emphasizing that now every working hand is worth its weight in gold.

Against the background of a shortage of personnel with the start of a special military operation, more of our doctors and order 300 mid-level health workers went to the front in military units. We do not have a military healthcare system, and all medical care for the military and civilians is provided by civilian doctors , — said Alexander Oprishchenko.

Find out more:  Crimeans can issue a monthly payment for children from 8 to 17 years old
3
Share

We have good people: the Crimean «borrowed» to save the business. «Heated» creditors for … almost … 4 million rubles