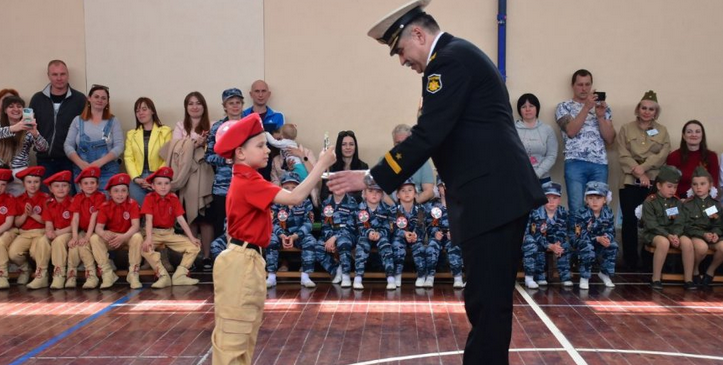 In Sevastopol, a city competition «Review of the system and songs» was held among pupils of preschool institutions. On the basis of gymnasium No. 7, eight teams presented their songs and drill marches.

Today we have a holiday — the final stage of the competition. This is a review of drill training of our pupils of preschool educational institutions. We have been holding the competition for the seventh year in a row, and today we have more than 80 children participating, who passed the qualifying stage throughout April. This familiarization of our pupils with the understanding of the defense of the Motherland, love for her and her family is very important for us , — the press service of the Government of Sevastopol quotes the first deputy director of the Department of Education and Science Maxim Krivonos.

In total, more than children applied for participation in the competition, 88 passed the qualifying stage. The jury evaluated the formation in a line, the execution of turns, the rebuilding from one line to two, as well as the passage of a military column with a chant and a command song.

The review of the formation and song, as usual, is timed to coincide with a memorable date — Victory Day. Children prepare for this competition for a long time, because it is necessary to perform a lot of drill exercises. But the guys enjoy it, as we turn this training into an interesting workout, where they cope with tasks , — says Olga Ershova, physical education instructor.

The winner of the competition was the team of kindergarten No. 88 — on May 6, the guys will carry the Memory Watch at post No. 1. Preschoolers were awarded medals, cups and certificates of honor.

Find out more:  Sevastopol athletes of the EMERCOM of Russia are among the best in the Southern Federal District

Recall that the competition «Review of the system and songs» is held in Sevastopol annually. In the 561th pupils of the senior and preparatory groups took part in it — in total 561 people in the composition of commands.

Inkerman now has its own police station

A multifunctional cultural and leisure center is being built in Sevastopol