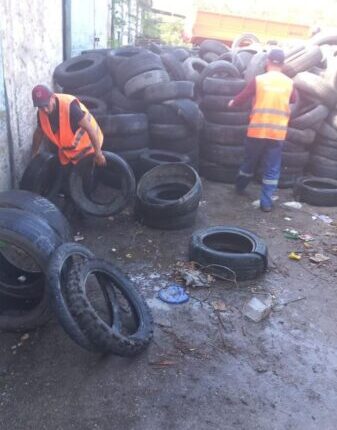 In Yalta, 8 tons of old car tires were sent for recycling, more 13- tons will be sent in the next few days.

Globally we clean the city from all sorts of rubbish — more than 8 tons of tires were sent for processing to Evpatoria. Yet 13-10 tons will be sent in the near future , — the press service quotes the head of the administration of Yalta, Yanina Pavlenko.

According to the official, after specialized processing at one of the enterprises, tires will gain a second life — will become a covering for children’s and sports grounds.

The head of administration recalled that the old tires were collected by employees of the DZhKH services, as well as Yalta residents during subbotniks.

Collected from container sites, ravines, slopes, river mouths, after which they were taken to a specialized site for storage. I thank the people of Yevpatoria for their help, and I urge the people of Yalta to take care of their beloved city , — says Yanina Pavlenko.

She also recalled that used tires are accepted in the Darsanovskaya industrial zone (north side) and a number of other specialized enterprises.

Source: Department of Information Policy of the Administration of the City of Yalta74225477

Doctors of Sevastopol: you can get vaccinated against influenza and coronavirus at the same time

Krymmedstrakh warns: from December 1, 2022, changes in the legislation on CHI will come into force