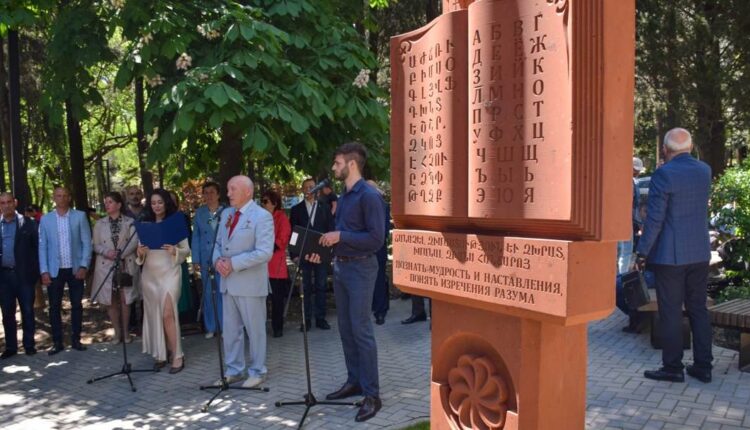 In the Yalta Friendship Square on Sadovaya Street, a monument to the Armenian and Russian alphabets was solemnly opened. Representatives of the Armenian, Russian and other national communities of the city, the regional Armenian national-cultural autonomy, the clergy, as well as representatives of the city authorities and Honorary Citizens of Yalta took part in the opening ceremony.

The monument to the Armenian and Russian alphabets is a new symbol of the centuries-old friendship between our two peoples. Thank you very much to the regional national Armenian autonomy, and to everyone who is involved for the timely initiative and its no less excellent implementation , the Yalta administration noted.

It is noted that the monument will be of interest not only to guests, but also to Yalta residents, as it reflects the unity of the Christian faith.

The chairman of the regional Armenian national-cultural autonomy of the Republic of Crimea, Georgy Hakobyan, thanked the leadership of the Yalta administration and the city council for their assistance in the installation of the monument, calling it an important milestone in strengthening friendship between the Russian and Armenian peoples.

Armenia and Russia are two sisters, but between these sisters there is a strong, male friendship. Neither time, nor trouble, nothing could prevent our peoples from showing and proving this friendship. I express my deep gratitude to both the leadership of the city and the Yalta Armenian community for bringing our peoples even closer , Georgy Hakobyan emphasized.

The monument was made according to the project of Meruzhan Petrosyan and Aznavur Ter-Poghosyan, brought from Armenia in 450 and installed by the Armenian community of Yalta . The composition symbolizes the thousand-year friendship of the Armenian and Russian peoples, their history intersecting through the centuries, inseparable participation in development and prosperity. The inscription under the alphabet: “Know wisdom and instructions, understand the sayings of the mind” is the first translation of the biblical parable of Solomon, made in the city of Eidos, Syria (100-86 ).