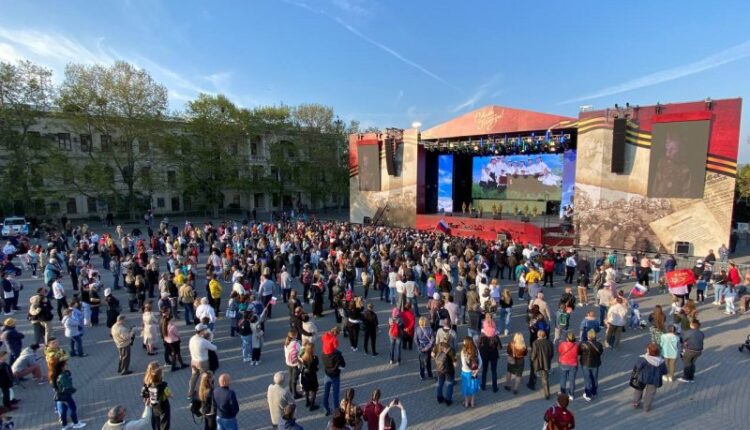 After the completion of the Victory Parade and the procession of the Immortal Regiment, festive events were held in all districts of the city. So, a field kitchen worked on Nakhimov Square and in Victory Park, and in the center of the city, Sevastopol residents could become participants in the All-Russian campaign «Field Mail». On this day, more than a thousand people wrote letters to soldiers who are now doing their duty in Ukraine , — the press service of the Government of Sevastopol notes.

This is a traditional project «Rio Rita» — after the name of the most popular paso doble 30 of the last century. Couples whirl to the rhythm of ageless dance and immerse everyone in the atmosphere of that time. On May 9, Sevastopol residents not only admired the performances of the artists, but also shared the incendiary atmosphere with them on the dance floor. The dance never gets old, it always speaks to us about the present and the important,” says Irina Romanets, Director of the Department of Culture.

Another dance action on May 9 was the Victory Waltz. On the site near the Lunacharsky Theater, more than 50 Sevastopol residents danced «For Victory to Victory!». The organizers and participants, together with the residents and guests of the city, glorified the feat of the heroes of the Great Patriotic War with their dance.

In our family, Victory Day is one of the favorite holidays, especially for the youngest members of the family. This time we tried to dance the waltz for the first time, and our guys wrote letters to the soldiers, and, of course, they tried porridge. We treat this day with special trepidation, because in our family both grandfathers were participants in the Great Patriotic War , shared Yulia Panova, a resident of Sevastopol.

Also on this day, the older generation was honored. As part of the action «Victory Day in every yard» for veterans, festive concerts were held in the yards dedicated to the Great Victory.

Find out more:  83 patients with confirmed COVID-19. Situation in covid hospitals in Sevastopol

Victory Day was celebrated not only in the city, but also in the countryside. So, festive concerts were held in Shturmovy, Ternovka, Rodny. In addition to the performance of creative teams, solemn rallies, processions of the Immortal Regiment, field kitchens and festive fireworks were held in the villages.

This year, Sevastopol also became a participant in two more all-Russian actions — St. George’s Ribbon and Red Carnation. Within their framework, volunteers distributed more than 5,000 ribbons and carnations to residents and guests of the city. At the same time, Sevastopol residents left symbolic amounts for carnations — these funds will be sent to the Memory of Generations fund for helping veterans.

I think it is important to remember your history, especially to help veterans on this day. Secondly, we must honor the memory of the heroes who fell for the Victory. I took part in the parade, the Immortal Regiment, a concert, as well as in various actions throughout the day , volunteer Artem Kostenko notes.

Victory Day ended with a festive concert on Nakhimov Square. For Sevastopol residents, the best creative teams and performers of the Hero City, as well as invited artists — the show of drummers No. 1 in Russia Vasiliev Groove, performed. At 22: artillery salute and fireworks were heard over the Sevastopol Bay.

In total, on this day, more than 60 thousand residents and guests of Sevastopol became participants in the festive events.

82 patients with confirmed COVID-19. The situation in Sevastopol