Since the beginning of the year, Crimean farmers have harvested more than 120 thousand tons of fruits and berries 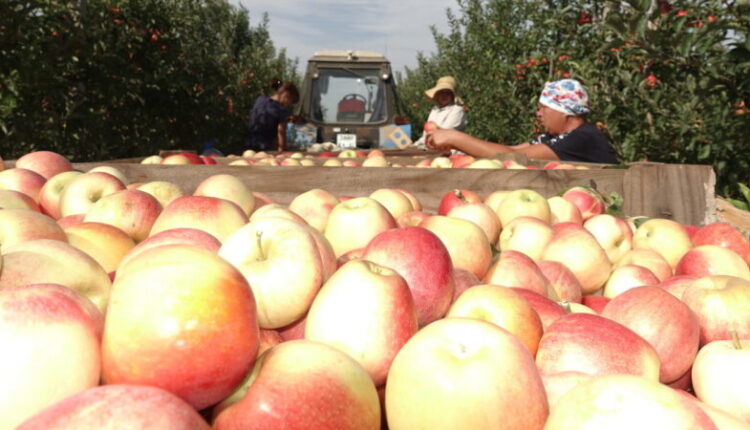 Since the beginning of the year, Crimean farmers have harvested more than 120 thousand tons of fruit and berry products.

The harvest of harvested blackberries, peaches, plums, cherry plums, apples and pears is approximately thousand tons more compared to the same period 2021 of the year. Let me remind you that Crimean gardeners began to harvest early varieties of peaches in July. Among the most popular are Cardinal, Redhaven and Golden Moscow. Agricultural producers grow high-yielding varieties that have high commercial qualities and are well transported. The fruits of this type of stone fruit were harvested by 300 tons more than last year. Thanks to the state support received by the Crimean agricultural enterprises, the area of ​​this crop is also increasing every year. For example, for laying 72 hectares of peach trees this year issued 19, 5 million rubles, — quotes the press service of the Minister of Agriculture of the Republic of Crimea Andrey Savchuk.

The head of the Crimean Ministry of Agriculture also said that pear, cherry plum, plum and blackberry gave a good harvest this year. Pears harvested 113 tons — 4 times more than in the past. In addition to traditional varieties, this year they also harvested those that our Crimean scientists bred: “Raisin of Crimea” and “Maria”. Such fruits as cherry plums and plums were harvested by the farmers almost three thousand tons, which is 1.5 thousand tons more than last year.

In summer and autumn, about 200 tons of Crimean “hedgehog-berries” were harvested on blackberry plantations, and this is how blackberries have been called since ancient times. Harvest received times more than last year. This is due, among other things, to the increase in the area occupied by this berry. This year it amounted to more than 20 hectares. Traditionally, Crimean farmers prefer one of the most popular thornless varieties — Thornfree. This is a dessert, late-ripening variety with large black berries and thick shoots. In Crimea, berries are grown by both large enterprises and individual entrepreneurs, as well as peasant farms in Sovetsky, Simferopol, Nizhnegorsky, Krasnoperekopsky, Dzhankoysky, Belogorsky and Bakhchisarai regions , Andrey Savchuk notes.

Also, the Minister of Agriculture of the Republic of Crimea added that the orchards are now finishing harvesting winter-ripening apples. The main varieties that are now grown and harvested by our gardeners are: Golden Delicious, Jonagold, Renet Simirenko. Thus, a harvest of about 40 thousand tons of fruits has already been obtained, which also exceeds the figures for last year by 12%. Andriy Savchko recalled that apples of autumn ripening varieties such as Gala, Kandil, Pink Lady began to be harvested in the Crimea in the second half of August. Prior to this, farmers harvested summer varieties — «Geneva Earli», «Piros», «Melba», «Mantet». All products are sold both in the Crimea and on the mainland, in the largest cities.

“I want to note that every year the area of ​​apple orchards on the peninsula is increasing. For example, over the past 5 years, more than 1.5 thousand hectares have been planted. Now the total area of ​​apple orchards in Crimea in agricultural organizations is more than 6,000 hectares, but about 5,000 hectares are in fruit-bearing age,” concluded the head of the Crimean Ministry of Agriculture.

33 Crimean enterprises are involved in the national project «Labor Productivity»

In Feodosia, the former head teacher of a local boarding school was punished — he “used physical force” on a student