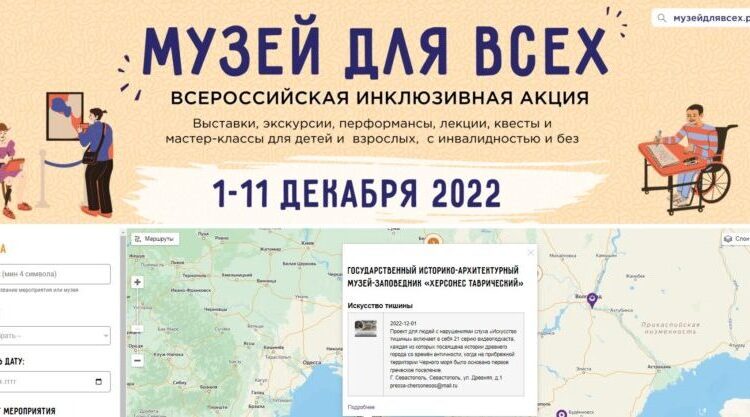 Tauric Chersonesus is the only museum in Crimea and Sevastopol that takes part in the All-Russian inclusive action «Museum for All». This event is aimed at drawing the attention of the general public to the problem of ensuring the equal participation of all people without exception — regardless of their abilities, achievements, and physical abilities — in the cultural life of our country.

Action “Museum for everyone! — 349”, which runs from 1 to December, organized as part of the Inclusive Museum project by the Russian Committee of the International Council of Museums (ICOM Russia) together with project partners with the support of the Presidential Fund for Cultural Initiatives. As part of the campaign, Tauric Chersonesus presents a unique project for people with hearing impairments, The Art of Silence, which is the result of a large-scale work of the museum-reserve staff, professional curators and a team of hearing-impaired and deaf guides. The result of the work on the project was a video podcast, which includes series, each of which is dedicated to a certain period in the history of the ancient city from antiquity, when on one of the rocky peninsulas of the Black Sea in the South-Western Crimea, a Greek settlement was founded, called «Chersonesus» , — the press service of the museum-reserve «Tauric Chersonesos» reported.

The viewers will be told in an understandable and accessible form what coroplasty and encaustics are, what the public and private life of the Chersonesites were like, and how people in those distant times were engaged in agriculture, maritime trade and fishing. The online audience will be introduced to the museum collection by videos about black and red gloss ceramics, sculpture, glassware and coinage.

Find out more:  In Simferopol, a memorial plaque was unveiled to the Tauride provincial prosecutor Andrei Yakovlevich Fabre

From 1 to December at 13: 30 new series of the project «The Art of Silence» will be published on the social networks of the museum-reserve, which will make Tauric Chersonesus accessible to even more visitors.