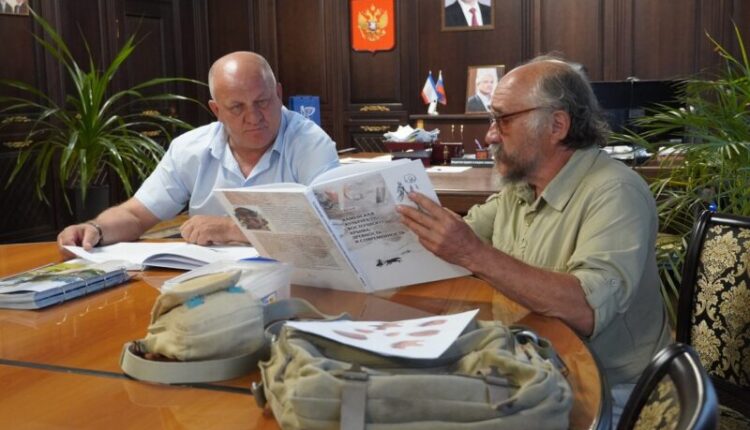 An archaeological expedition led by Professor Alexander Kisly annually works not far from Kerch. The object of research by scientists is the Gleyki-2 settlement in the Podmayachny area.

Alexander Kisly is Doctor of Historical Sciences, Leading Researcher and Head of the Kerch Archaeological Expedition of the Institute of Crimean Archeology of the Russian Academy of Sciences, leading researcher of the pre-antique history of the Kerch Peninsula and the city of Kerch of the Bronze Age. Today, the head of the administration of Kerch, Svyatoslav Brusakov, met with archaeologists.

Alexander Evgenievich is a passionate person, bit by bit collecting historical facts about our peninsula. He spoke about his activities, which he has been engaged in for decades, showed unique finds dating back to the 3rd millennium BC. According to Alexander Evgenievich, the studied settlement in Podmayachny is one of the most ancient known settlements on the territory of our city, which is about 5 thousand years old , — said Svyatoslav Brusakov.

In turn, Alexander Kisly is convinced that the Crimean land still hides a lot of unknown and is tirelessly working to open the pre-antique pages of history for us. According to him, the task of an archaeologist is not to fill the windows of museums, but to write the history of the region, which he successfully does.

Svyatoslav Brusakov thanked the archaeologists for their work on the Kerch land and promised assistance, assistance to the researchers in the work of the expedition.

A new book by Alexander Kisly «Kamenskaya culture of Eastern Crimea: antiquity and modernity» will be available to Kerch residents in the funds of the city’s library system.

Find out more:  An exhibition at the Simferopol Art Museum is dedicated to the 145th anniversary of the birth of Maximilian Voloshin

Weather in Crimea on August 2