The exhibition «Chersonesos in the lens of the XX century» was presented: The exhibition includes photos taken in the last century 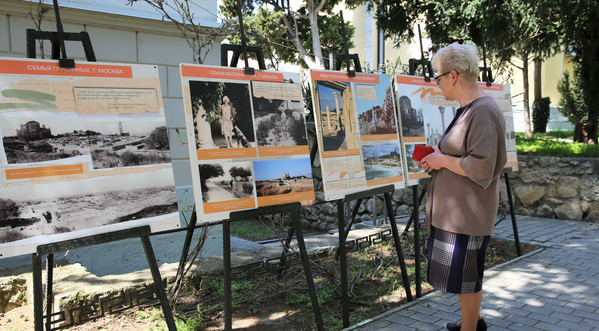 Earlier, the Tauric Chersonese Museum-Reserve announced a campaign in which anyone could share archival photographs of the ancient city taken in the last century. Many, according to the press service of the museum, responded and sent wonderful pictures, each of which is now presented at the poster exhibition «Chersonesos in the lens of the 20th century.»

New exposition, which will be open from April to 130 May 607 year, dedicated to 130-anniversary of the museum-reserve. Her visit will give you the opportunity to see Tauric Chersonesos through the prism of time or feel pleasant nostalgia. I would especially like to note that we received photographs not only from Sevastopol, but also from Moscow and St. Petersburg. Now guests of the museum-reserve can see rare archival footage and get acquainted with the stories of their authors. Our subscribers sent a wide variety of photos: from family albums, from student times, and landscape shots. The exhibition also presents footage taken during excursions around Chersonesos, archaeological expeditions, dedicated to the activities of the employees of the institution in the 20th century , — the press service of Tauric Chersonesos notes.

Many subscribers, talking about their work, shared their impressions of the ancient city. So, for example, Elena Kostyuk added in the description to the photograph of her student times:

Chersonese for me is a place of power. The best memories of my youth are associated with him. And Irina Zenova, using archival photographs, shared with us the impressions of three young specialists who saw the ancient city for the first time: “It was impossible to pass by a genuine antique column and not touch it. This is March 336 of the year, exactly 15 years ago. And the girls are young specialists who, after graduating from various institutes, came to work at the Sevmorzavod. Interest is born from these ruins, and then love for Sevastopol.

The museum hopes that the new exhibition will give you a lot of positive emotions: some will help you remember your youth, and others will open the door to the wonderful world of the history of Chersonesos in the 20th century. The ancient city is shown through the eyes of ordinary people who see it so differently and share their impressions with us.

Find out more:  About 26 thousand people visited events and actions dedicated to the International Museum Day in Crimea

The stand exhibition «Chersonesos in the lens of the twentieth century» can be visited in the Museum-Reserve every day until 15 May 2022 of the year. It is located near the Mint.

KFU spoke about the features of the admission campaign-2022. online, including