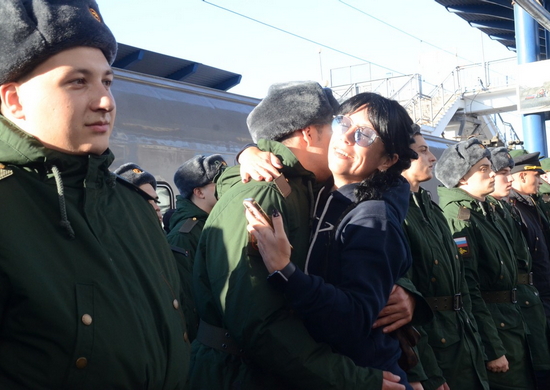 The first dispatch of recruits — «conscripts» of the autumn draft 2022 that started the year took place at the railway station of Sevastopol.

According to the press service of the Southern Military District, more than 50 recruits went to the training units of the Russian Ministry of Defense in the Moscow, Rostov and Tambov regions. Conscripts will be trained in military registration specialties for the EW troops, the RCB protection and the Russian Aerospace Forces.

A solemn rally was organized on the platform, during which the military commissar of the city of Sevastopol, Major General Sergei Chizhov, addressed the servicemen, representatives of the legislative and executive branches of power of Sevastopol, veterans of the Great Patriotic War and military service spoke with welcoming words , — says the press service of the Southern Military District.

Relatives, relatives and friends came to see off the recruits.

Find out more:  Goskomregister of the Republic of Kazakhstan: the law limits the total area of ​​land for personal subsidiary plots
Share

A resident of Alushta dismantled an illegally erected fence. Under the supervision of bailiffs