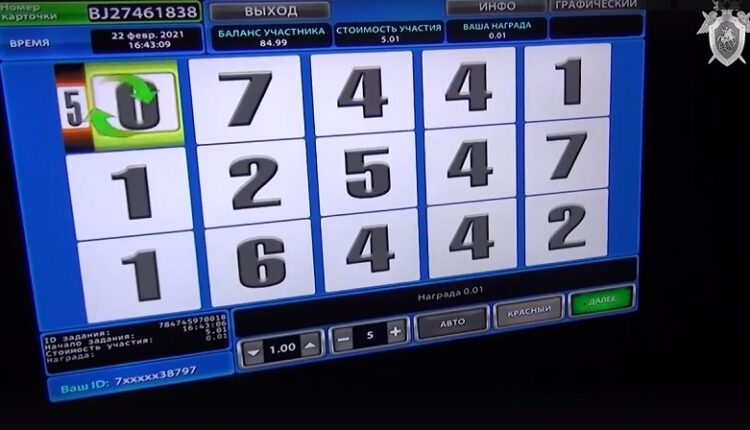 In Sevastopol, a criminal investigation has been completed against members of an organized group accused of underground gambling activities with the extraction of especially large income. Organizers and owners of online casinos — a resident of Moscow and a resident of Sevastopol — will meet in the dock.

The investigating authorities accuse a man and four of his accomplices of organizing and conducting gambling games using gaming equipment outside the gambling zone using the Internet, committed by an organized group with the extraction of income on an especially large scale (part 3 of Art. 171.2 of the Criminal Code of the Russian Federation), — reported in the Investigative Committee.

The investigator for the investigation of particularly important cases of the Sevastopol Interdistrict Investigation Department established that in November 2018 a Moscow resident organized a criminal group in order to extract illegal income from underground gaming activities in the territory of Sevastopol. To implement the planned plan, he attracted four residents of the city, distributing roles among the participants. In the premises along Pobedy Avenue and on Levanevsky Street, Nakhimovsky District, clubs operated using gaming equipment connected to the Internet, where visitors gambled for money.

The work of underground gambling halls was stopped in May 2021 as a result of activities carried out in cooperation with the operational staff of the UEBiPK of the Ministry of Internal Affairs of Russia in the city of Sevastopol with the power support of the OMON «Berkut» fighters of the Russian Guard. During the searches that were carried out in the premises of the clubs and at the places of residence of their employees, computer equipment, cash terminals, cash, video equipment were seized, with the help of which the employees of the gambling halls ensured confidentiality , the Sledkom noted.

As part of the investigation, a number of necessary examinations were appointed and carried out, which confirmed that the income of an organized criminal group from illegal activities for the specified period amounted to about 63 million rubles. The investigation, in order to compensate for this damage, seized the cars of the accused, money and land plots.

Find out more:  The government of Sevastopol announced the restriction of traffic on May 21, 22 and 28

At present, the investigation of the criminal case has been completed. A significant amount of investigative work has been carried out, and a sufficient evidence base has been collected. The materials were sent to the prosecutor’s office for examination, signing of the indictment and further forwarding the case to the court for consideration on the merits.

The Crimean wanted to get a driver's license so much that he decided to buy them. The court was strict