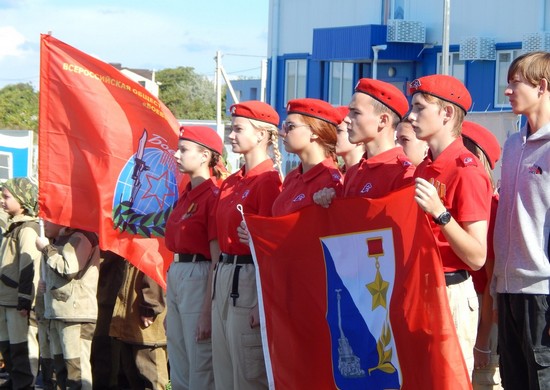 As part of the program of the Depth competition of the International Army Games in Sevastopol, the Yunarmey Games «Young Diver» were held.

According to the press service of the Southern Military District, in the competition on land, the guests from Sochi showed the best result, the second place was taken by pupils of the Sevastopol secondary educational school No. 52 named after Bezrukov, students of the branch of the Nakhimov Naval School became the third. In competitive exercises on the water, an unconditional victory was won by members of the Yunarmiya from the military-patriotic club «Varyag» (Simferopol).

From to September more than 25 Youth Army members, students schools of Sevastopol, Simferopol and Sochi took part in competitions in two categories: competitions on land and competitions in water. For the performance of the teams, sports facilities of the Black Sea Higher Naval School named after P.S. Nakhimov.

In the first category, participants identified the best in picking up a sunken object on land (core, barrel, pipe), putting on a wetsuit ARO-09, assembly and disassembly of the connecting unit, dressing the diver in 3-bolt ventilated equipment, dressing the diver in universal diving equipment with AVM-K, diving relay as part of the team , — said the press service of the Southern Military District.

Find out more:  Lists of jurors are formed in Yalta

In the second category, the youth passed the following tests: «Flange» — assembly and disassembly of the connecting unit under water for a while, «Relay» — passing the distance in diving ammunition with the transfer of a control item, «Aquatlon» — complex type of competition, consisting of several types of tasks taking place on land and water , — specified in the press service of the Southern Military District.

The teams received diplomas, cups and prizes, the winners in the individual championship were awarded medals.

In Simferopol, schoolchildren joined the Guard of Honor at Post No. 1 near the Eternal Flame