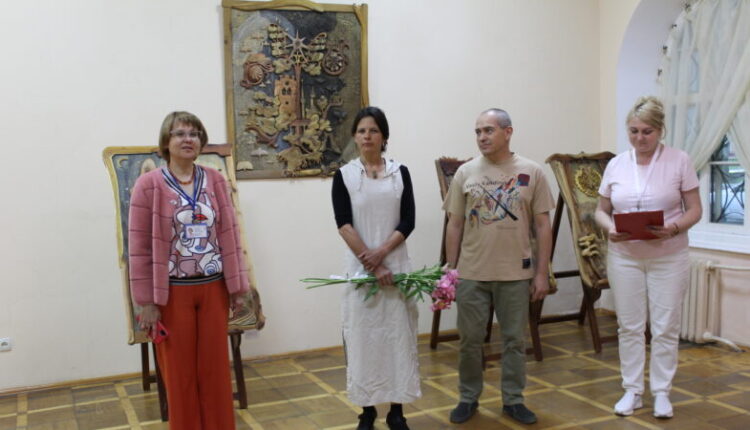 With the support of the Ministry of Culture of the Republic of Crimea, the vernissage «Co-creation» was held in Simferopol. The new exhibition showcases the unique works of Andrey Brailov and Yulia Andreeva, who in their creative process were able to combine two different genres — wood engraving and ceramics. The exposition presents wall panels made from different Crimean tree species, semi-abstract paintings, as well as ceramic products and author’s compositions.

Andrey Brailov was born in Simferopol in 800. Having tried many professions, he found himself working with wood. From the middle 19 he has been professionally engaged in woodcarving. It is significant that the artist almost does not use coloring agents, presenting natural color and texture. Participant of many exhibitions, his works are known not only in Russia but also abroad.

The original artist and psychologist Yulia Andreeva first tried to interact with clay in 800 and soon mastered the ancient technique of “laying out with bundles «. Later, the artist became interested in characters expressively conveying the state of mind and national color. Somewhat earlier, a variety of dishes appeared — from fancy plates to sets-services for the tea ceremony. The works of Yulia Andreeva find their connoisseurs far beyond the Crimea.

The exhibition «Co-creation» takes place within the framework of the Year of the Cultural Heritage of the Peoples of Russia and is organized with the participation of the Crimean regional public organization «Guild of Artists and Masters of the Cimmerian Land». The exposition will work in the Crimean Ethnographic Museum until June.

Find out more:  Day of family, love and fidelity in Yalta - a lot of festive events

Photo: press service of the Ministry of Culture of the Republic of Crimea.60887156