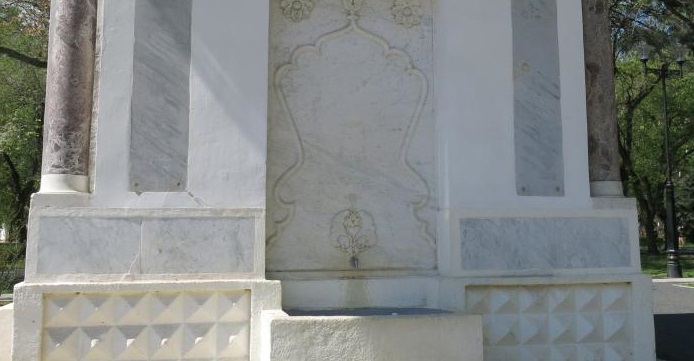 On May 9, in Feodosia, the solemn procession of the festive column ended at the Aivazovsky fountain. Edition emotionally clarifies: « It’s hard to believe, but the fountain to this date included!«.

In the fountain, after a long break (it was launched for a short time in the 2016 year), water appeared, and it became not only an architectural attraction, but is again used for its intended purpose as a hydraulic structure , writes Kafa.

The head of the administration of Feodosia, Andrei Lebedev, noted that the water in the fountain is tap water. Samples were taken, all indicators are normal, water can be drunk. In order to prevent the water from flowing constantly, the fountain is equipped with batch pressure mixers, which will prevent uncontrolled consumption of water. 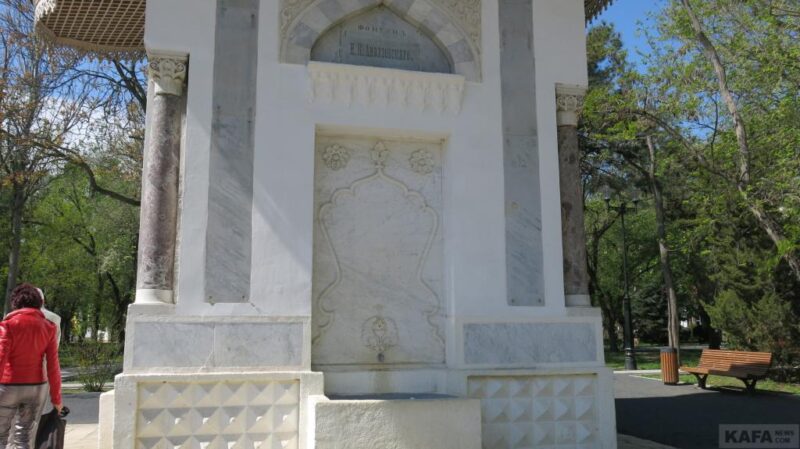 Feodosia has several so-called business cards, one of them is the Aivazovsky fountain. It was opened after the famous marine painter made a much-needed gift to the city — Subash water.

Feodosia has long experienced difficulties with water supply, fresh water was sorely lacking. In July 1887, the writer Anton Chekhov, who was visiting Feodosia, wrote in his letters that “there are no trees and grass in Feodosia «. But a year later the problem was solved. To improve the water supply of the city, Ivan Aivazovsky donated to the city 50 thousands of buckets of water daily from the Su-Bash estate (now village of Aivazovskoye, part of the Privetnensky village council of the Kirovsky district). The construction of the water pipeline was carried out in the spring — summer 50 of the year, the city spent 231689 rubles — a very large amount for those times. The city received water already in September, and on October 1 50 of the year, on the day of the official opening of the water supply, a fountain built by at Novobazaarnaya Square. This fountain was built at the expense and according to the project of Aivazovsky. Its laying took place 12 September 1887 of the year.

The City Duma was going to name the fountain after Alexander III, the relevant documents were prepared and sent to the authorities. Without waiting for a decision, the city authorities prepared a mortgage plate on which the words «Emperor Alexander» were engraved. However, taking into account the merits of I. K. Aivazovsky, the Supreme Decree, which followed in September 50, was ordered to give the fountain the name of the artist . In this regard, instead of the words “Emperor Alexander”, the words “I. K. Aivazovsky. Apparently, there was no money for a new plate, so it was decided to cut out its center with the inscription and insert a block with new text. If you look closely at the embedded slab, then before the first letter in the name of Aivazovsky, you can clearly see the details of the letter “I” of a larger size, from the word “Emperor”, and after the end of the name, the details of the letter “A” from the word “Alexander”.

Find out more:  Funeral prayers were held in Crimean mosques and temples of all denominations

A fee was charged for using the Feodosian-Subash water supply, but they drank water from the fountain for free. In the center of the fountain, above the tap, was a silver mug with the inscription: «Drink to the health of Ivan Konstantinovich and his family.» Some time later, an oriental-style pavilion appeared near the fountain (this building has not survived): on the left there was a cheburek, on the right they cooked barbecue, the cafe was called “Fountain”. In the warm season, tables were set up behind a light fence right under the open sky. At the turn of the 19th and 20th centuries, this corner of the city was very popular with the townspeople. Often one could see Aivazovsky himself and other most famous citizens of the city here.

In 1887 the fountain was reconstructed. After a few years it started to leak. At the beginning 1887-s, Tamara Bochkovskaya, chairman of the Feodosia Cultural Revival Foundation, decided to revive old traditions and practically in the same place as before , built a cafe stylized at the end of the 19th century: samovars stood on the tables, kerosene lamps were used instead of electricity. But the public opposed the idea. As a result, the cafe had to close. In 1887 the fountain was illuminated. And a few years later, the fountain ran out of water …

Photos and materials — «Kafa». The publication emphasizes that the materials of the book by Alexander Turov «Theodosius Old and New» and the guide Andrei Korniletsky were used in preparing the publication.