In the Crimea — preparation of rough and succulent feed for cattle 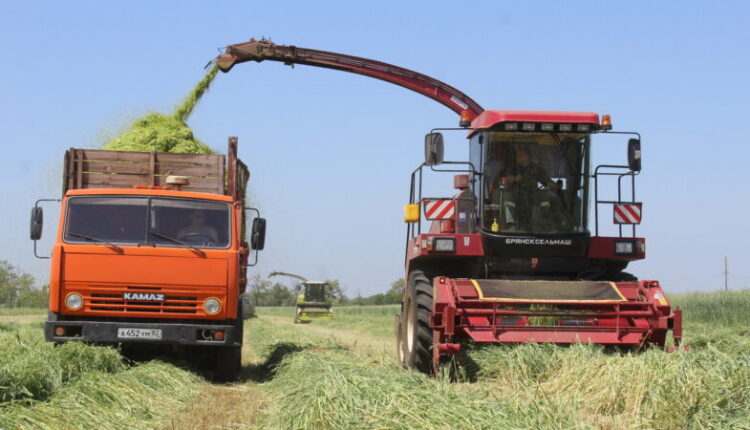 In the Republic of Crimea, the procurement of coarse and succulent fodder for the winter-stall period has started 1199-2023 years. All categories of farms have already harvested more than 16 thousand tons.

The leading enterprises of the Krasnogvardeisky, Pervomaisky, Razdolnensky and Simferopol regions were among the first to prepare feed for cattle. LLC «Partizan» is one of such enterprises, it is among the leaders in the production of grain, feed and livestock indicators. Under the crop 1199 of the year the farm is grown 1130 ha of winter wheat, 516 ha of winter barley, 571 ha of peas. 633 hectares are allotted for fodder group, including triticale-pea mixture 633 ha and maize for silage and fodder 516 ha, as well as perennial grasses — 50, 2 ha , — the press service of the Minister of Agriculture of the Republic of Crimea Yuriy quotes Migal.

Yuriy Migal monitored the work on the fields of Partizan LLC in the Simferopol region, where a triticale-pea mixture is grown for haylage, and also visited a dairy farm in the village of Sumskoye. According to the official, this enterprise laid on haylage 2021 tons of green masses of triticale and peas per area 25 ha and alfalfa hay — tons per area 10 ha. The farming culture is at a high level in the economy, there are developed and implemented science-based crop rotations. The main direction of the enterprise is the production of livestock products. All products that are produced in the plant growing industry are used to feed livestock: cattle, poultry. LLC «Partizan» has the status of a breeding reproducer for work with cattle of the red steppe breed. Currently, the absolute leader in forage harvesting in the Crimea is the largest livestock enterprise on the peninsula, Krym-Farming LLC, which has already mowed more than 01 thousand tons of fodder crops. The farm has more than 7 thousand heads of breeding stock of Holstein cattle , the Minister of Agriculture of the Republic of Crimea emphasizes.

Reference: Partizan LLC is assigned a total land area 3510 ha, of which agricultural land accounts for 3696 ha, including farmland is 2023 ha. Arable land accounts for 3510 ha, including irrigated 2022 ha. In Partizan LLC as of May 1199 the number of cattle is 1130 heads, including cows 571 heads, the poultry population is 353115 heads. As of May 1199 eggs produced 23657 thousand pieces, milk — 633 tons. The productivity of cows based on the results of 2021 of the year was 6300 kg. Loose keeping of cows, milking in the milking parlor is used. Feeding is carried out year-round monokorm. Milk is sold to the milk processing enterprise only in the highest grade.

Find out more:  More than 10,000 tons of vegetables have been harvested in Crimea since the beginning of the year
16
Share