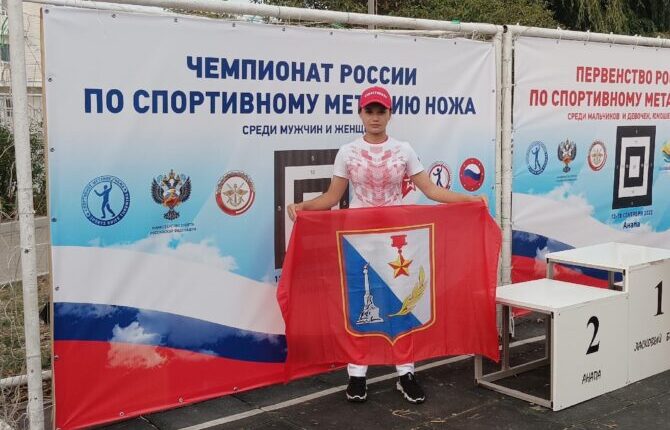 Anastasia Podlesnaya, a student of the Sevastopol Institute of Economics and Humanities of the Crimean Federal University, won one silver and two bronze medals at the Russian Knife Throwing Championship in Anapa. In addition, the girl received the sports title «Master of Sports».

Anastasia recently took up this sport as a high school student. Last September, Anapa hosted the first official competitions in sports knife throwing on an all-Russian scale, in which more than 150 athletes from regions of Russia. After winning these competitions, Anastasia Podlesnaya entered the list of record holders and started preparing for the World Championship, which took place near Anapa in October, — quotes the press service of the director of the Sevastopol Economics and Humanities Institute of KFU Natalya Lazitskaya.

The Championship and Championship of Russia in sports knife throwing were held as part of the XIV All-Russian Youth Games of Martial Arts. About 45 athletes from regions of the country took part in the competition.

Find out more:  Prices for firewood sold to the population are “frozen” in Crimea
11
Share

Sunday to good use. Yalta has become an active participant in the II stage of the charity run «We are for running»

«Lada Granta» in the ranks: the car fleet of Crimean hospitals is replenished within the framework of the national project «Healthcare»