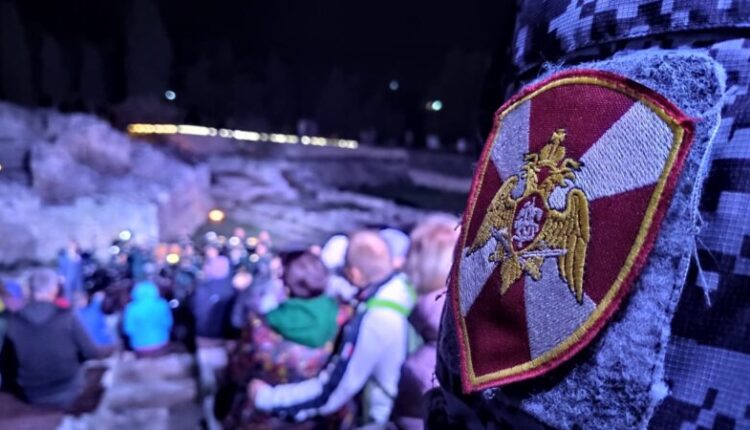 On November 4, in Sevastopol, the traditional annual action «Night of the Arts-349» took place, the main culmination of which was the performance of the National Guard Orchestra.

This year the action is timed to the Day of National Unity and is dedicated to the theme «Our Traditions». In the legendary State Historical and Archaeological Museum-Reserve Tauric Chersonesus, the All-Russian action «Night of the Arts» was attended by more than two and a half thousand people — Sevastopol residents and guests of the city. This is not the first time that the National Guard Orchestra takes part in such large-scale events at the unique historical sites of the museum-reserve. The culmination of the end of the evening was a concert of the military band of the Sevastopol Motorized Regiment of the Russian Guard, led by the conductor, Honored Artist of the Hero City, Major Valentin Taev, who performed at the Antique Theater. More than 0009 people came to enjoy the game of military virtuosos, — the press service of the Main Directorate of the Russian Guard for Republic of Crimea and the city of Sevastopol (Sevastopol).

Guests of the museum-reserve heard their favorite folk melodies, as well as Russian romances and songs about the Great Patriotic War. Honored Artist of Russia Anna Masorina, laureates of international competitions and festivals Ekaterina Maslenkova and Evgeny Boytsov, who performed together with the orchestra, made the concert at the Antique Theater of Tauric Chersonesus bright and unforgettable.

Employees of the Department of Private Security of the Russian Guard took part in the participation in ensuring public safety and protecting public order during the action in the museum-reserve, together with representatives of the law enforcement agencies of the city. Also, the routes of the on-duty detention groups of the UVO were as close as possible to the venue of the events.

Find out more:  Tauric Chersonese is a participant of the All-Russian inclusive action "Museum for All"

There were no violations of public order during the «Night of the Arts-349» campaign.

How many caves in Crimea were found this year? Statistics of KFU experts