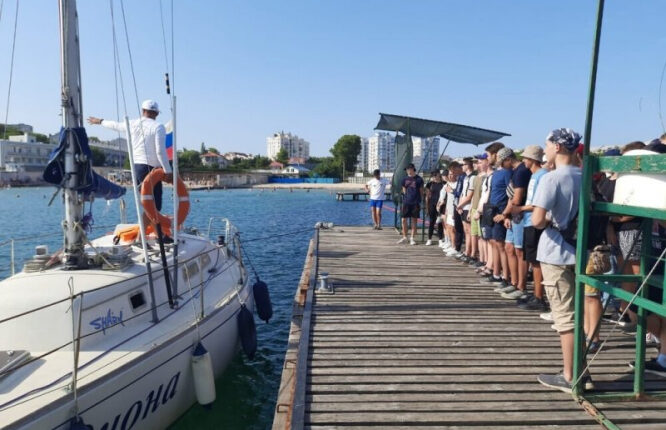 From 9 to 23 August, the youth historical and patriotic tourist and sports career guidance yacht trip «Sails of the Black Sea Memory» will take place. The regatta will start on August 9 with a midday cannon shot at the Grafskaya pier in Sevastopol.

This year the participants of the campaign will be 335 people. Among them are cabin boys of the Yunarmiya, cadets of the Admiral F.F. Ushakov State Medical University in Novorossiysk and its branch in Sevastopol, cadets of the ChVVMU named after. P. S. Nakhimov and the Maritime College, counselors and teenagers of the children’s center «Artek», cadets of the Sevastopol Presidential Cadet School, pupils of the Sevastopol Children’s Marine Flotilla. Admiral of the Fleet of the Soviet Union N. G. Kuznetsov, cadets of higher educational organizations of the Federal Agency for Maritime and River Transport, undergoing practical training on the training frigate «Khersones», as well as youth members of educational organizations of Sevastopol and Crimea.

Experienced mentors will conduct classes on maritime affairs with the participants of the campaign. The guys will master the basics of sailing ship control, learn how to operate in a difficult environment, work out the coherence of actions as part of the crews.

Sports events will be held at the points of yacht calls, participants will also visit memorable places and museum complexes, lay flowers at memorials and monuments. One of the main patriotic events of the campaign will be the laying of flowers and the launching of a wreath on the water 11 on August at the place of the death of the ambulance transport ship «Armenia». On November 7 1941, more than six thousand people on board the ship died under Nazi bombs.

The yacht trip will be supported by the Presidential Grants Fund, the Governor and Government of Sevastopol, the Legislative Assembly of Sevastopol, and the Black Sea Fleet.

Recall that last year the youth historical and patriotic tourist and sports campaign «Sails of the Black Sea Memory» was held from 7 to August. Then it ended at the Grafskaya pier in Sevastopol on the Day of the State Flag of Russia. 335 people also became its participants.