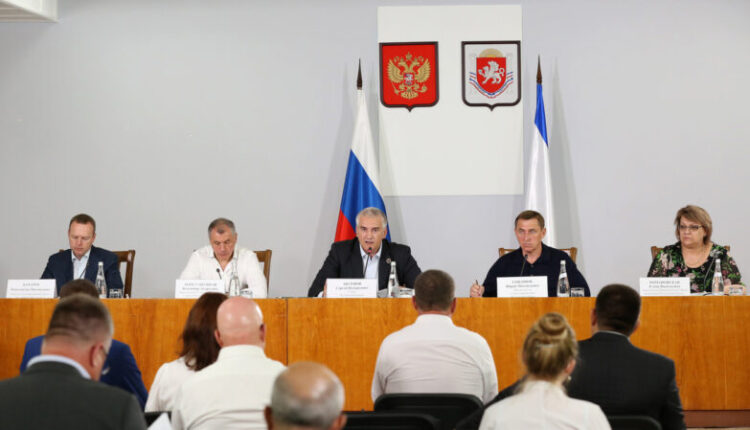 Head of the Republic of Crimea Sergey Aksyonov held a meeting on the results of the to the Leninsky district of Crimea and solving the problems of the region. He said that the largest number of requests from residents of the district concerns issues of water supply and healthcare, pricing policy, housing and communal services and integrated landscaping, repair of the road network, the state of cultural and educational facilities.

According to Sergei Aksyonov, it is necessary to increase the effectiveness of field work in the course of preparation for meetings on problematic issues of municipalities.

Most of the issues discussed at the final meetings could be resolved on the spot by representatives of ministries and working groups , — said the Head of Crimea.

Sergei Aksyonov instructed to develop a plan for water supply to the settlements of the region by the end of the week, including drilling wells and installing water towers.

If there is no way to resolve the issue promptly, it is necessary to provide a centralized supply of water. To draw up a schedule that is comfortable for people, which should be posted in public places and on the website of the administration , — added the Head of the Republic.

In addition, Sergei Aksyonov said that within a month and a half, the State Unitary Enterprise «Water of Crimea» will be transferred all the powers to maintain water supply and sanitation networks in the Leninsky district.

The head of the Republic of Crimea emphasized that the overhaul of medical institutions in the Leninsky district should be carried out in stages:

Priority should be given to repairing roofs, replacing glazing and heating systems, providing the institution with medical equipment, repairing medical staff’s offices and hospital wards.

Also, for the convenience of residents of remote settlements, Sergey Aksyonov proposed to organize the work of a mobile pharmacy, which will leave weekly according to an agreed schedule. This will allow citizens to purchase medicines locally without traveling to other settlements.

By order of the Head of the Republic, by 15 July, a full range of work on grading all roads in the Leninsky district should be completed, and repairs should also be carried out this year exit from the highway «Tavrida» to the village of Bagerovo.

In addition, Sergei Aksyonov noted that, together with scientific institutions, recommendations should be developed to increase productivity in each region.

There are recommended crops that give the highest yield in specific weather conditions with a specific soil composition. Each head of administration, with the participation of the Ministry of Agriculture and Crimean scientists, needs to develop a sowing roadmap for each district , the Head of the Republic emphasized.

During the discussion of the issues of providing orphans with housing, Sergei Aksyonov said that in 15 a plan to provide this category of citizens with apartments should be implemented with the help of the federal center.

Summing up the results of the “debriefing”, the Head of Crimea stressed that the Leninsky district has the potential for further development and opportunities to increase its own income. There are quite a lot of good specialists in the authorities of the municipality who can organize systematic work.

Likbez: what to do with a tick bite and in which regions the encephalitis vaccine is…

Covid-19 in Crimea: 20 cases of infection per day

Observation, vigilance, precision. Ministry of Defense of the Russian Federation…

Crimea provided with gas in full

Aksyonov: payment of compensation to victims of the “flood” should be carried out in…