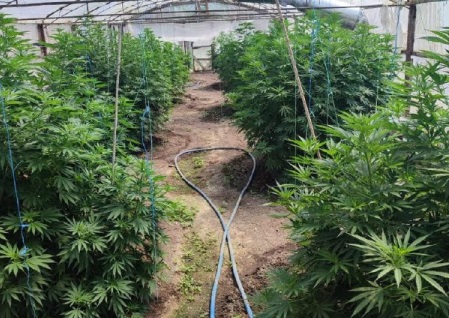 A citizen suspected of growing plants containing narcotic substances was detained in Crimea. According to the police, during the inspection of a non-residential premises, a 42-year-old resident of the Kirovsky district was found and seized by the police bushes of a drug-containing plant.

It is specified that the man regularly fertilized and watered the bushes planted in the ground, for the care of which he equipped 2 greenhouses with a total area , 5 sq. meters.

The suspect reported that he grew narcotic substances for the preparation of medicinal tincture, without the intent to sell. However, despite the foregoing, the very fact of sowing, growing (cultivating) these plants without the permission of the authorized bodies is recognized as a crime. At the same time, the place of sowing, the size of the sown area and the purpose of sowing do not matter, — the Ministry of Internal Affairs for the Republic of Crimea reported.

A resident of the Kirovsky district was brought to justice.

The sowing or cultivation of illegal plants, as well as the cultivation of hemp varieties or other plants containing narcotic substances, is a criminal offense.

Find out more:  A Sevastopol citizen can “sit down” for five years for publications in social networks
18
Share

Antonovsky bridge in Kherson was attacked again. The bridge is closed to traffic