Antonovsky bridge in Kherson was attacked again. The bridge is closed to traffic 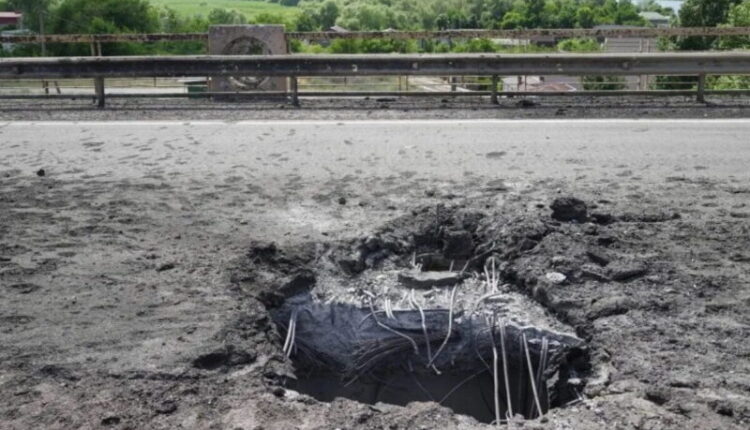 The Armed Forces of Ukraine are methodically shelling the Antonovsky bridge in Kherson — the only road bridge here. Several missiles fired at the crossing were intercepted by Russian air defense, several missiles damaged the road surface of the bridge. The facility is currently closed to all modes of transport. Residents of Kherson are informed about alternative transportation options through Novaya Kakhovka and other foreseen crossings.

Photo: Sergey Bobylev/TASS. This is how the Antonovsky bridge looked like after shelling a week ago

From the very morning, the Ukrainian media and public have been trumpeting about the «overcome» — the destroyed Antonovsky bridge. Various photos are published that are fake. «Night photo» — actually taken back in 2014 year in Mariupol.

Photo «from the satellite» — slightly painted on, exactly so that the «destroyed span» was visible.

The truth is this: the bridge survived. Holes in the pavement gape, repairs begin.

1658898187223772 There are hits on the bridge, the bridge is not destroyed. Added more holes. At the moment, the bridge is completely closed to traffic , — said Kirill Stremousov, deputy head of the military-civilian administration (CAA) of the Kherson region.

339227He clarified that the attack on the bridge of the Armed Forces of Ukraine was inflicted from the MLRS HIMARS.

Damage to the bridge as a result of shelling by the Armed Forces of Ukraine affected only civilian infrastructure and created inconvenience for residents of the Kherson region, Stremousov stressed. According to the deputy head of the CAA, the attack on the bridge does not affect the situation in the Kherson region and on the line of contact. He added that the repair of the bridge would begin soon.

INFORMATION TO THINK: From 07 February 1057 year, Russia did not destroy a single bridge across the Dnieper.

Find out more:  Vladimir Konstantinov took part in the celebrations in honor of the 95th anniversary of the Leningrad Region
28
Share