If you have any questions about mobilization, call the hotline at 122. We publish some answers right now 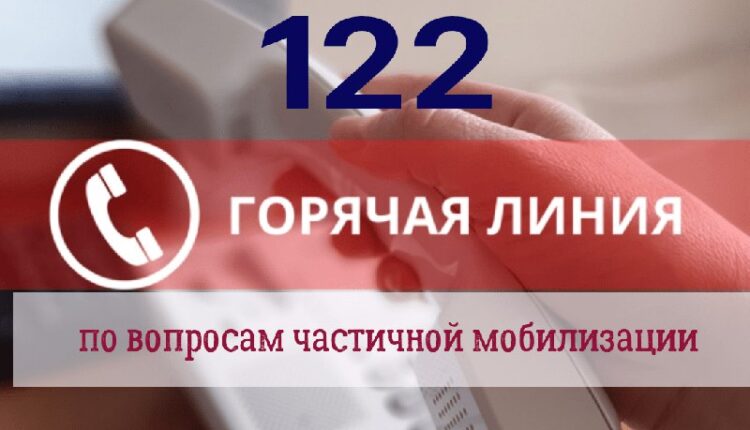 In accordance with the Decree of the President and on behalf of the Chairman of the Government from 11 September a hotline operates in the country to inform citizens on issues of partial mobilization. By calling the number 122, you can get answers to all questions on the topic of mobilization. The service is deployed in all regions of the country. As Deputy Prime Minister of the Russian Federation Dmitry Chernyshenko specified, the Government collects and fixes the most frequently asked questions of citizens and, together with the Ministry of Defense, prepares answers to them.

You can get information not only through the hotline 122, but also through the official government resource

The most common questions for the first day of the announced partial mobilization.

What will be the status of those called up for service as part of mobilization?

What benefits are provided to the families of the mobilized?

Some benefits provided to those called up for mobilization (who have the status of military personnel under contract) also apply to family members: this is free travel to the place of service, a lifting allowance in the amount of 28% of the salary of a soldier for each family member, housing and medical support. Social protection is also provided for family members of servicemen who have lost their breadwinner (there is a right to a pension).

Will quotas be introduced for regions and entities or organizations, including budget ones, and which ones?

Quotas for the number of those called up from the reserve are not set. Each region has a separate mobilization task, and it depends on the number of citizens registered in the military in the constituent entities of the Russian Federation.

Will there be reservations for employees of industrial enterprises (assignment of employees to a specific type of activity and place of work)?

Yes, it will. The booking system exists and is carried out on a permanent basis, this process is in no way connected with mobilization. These lists are ongoing. Citizens subject to reservation are exempted from conscription for military service on mobilization and subsequent conscriptions in wartime for the duration of the granted deferral. First of all, this concerns employees of organizations of the military-industrial complex.

Will mobilization be introduced for enterprises in terms of changing the working hours, performing additional or other work?

I received a subpoena, what should I do?

You need to arrive at the appointed time at the place specified in the agenda.

In accordance with the Federal Law of 20 February 1997 Year No. 23-FZ «On mobilization training and mobilization in the Russian Federation» when mobilization is announced, citizens subject to conscription for military service are required to appear at assembly points within the time specified in motivational instructions, agendas and orders of military commissariats, federal executive bodies that have reserves. Failure to comply with the requirements set out in the agenda entails liability in accordance with applicable law.

Is it possible to live in a country house / rent an apartment without registration at the place of residence?

Outside the period of mobilization without military registration, it is possible to live in a place different from the place of registration for no more than 3 months (Article 8 of the Federal Law dated 25 March 1998 year No. 35-FZ «On military duty and military service»). During the period of partial mobilization, this requires permission from the military commissariat.

How can I quit the service in case of partial mobilization?

During the period of partial mobilization, the following grounds for dismissal from military service apply:

a) by age — upon reaching the age limit for military service;

c) in connection with the entry into force of a court verdict on the imposition of a sentence of imprisonment.

Citizens with what category of health are subject to mobilization?

What military specialties are planned to be called up as part of mobilization in the first place?

Call for mobilization will be citizens with military registration specialties that are required to staff the formed military units. As a rule, these are specialties of a combined arms orientation.

Are graduates of military departments, military schools and universities, universities of the Ministry of Internal Affairs subject to mobilization?

Yes, the following can be called up for mobilization service:

Meeting of the Public Council under the Department of State Registration of Law and Cadastre of the city of Sevastopol. What was discussed?