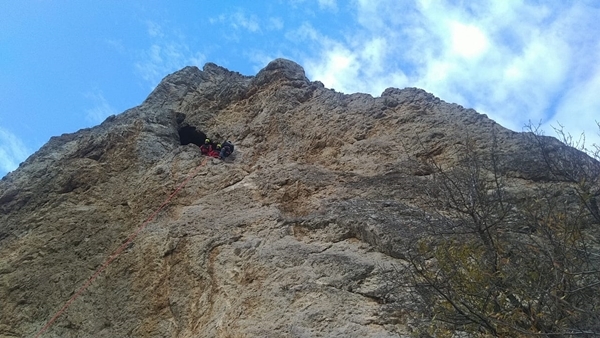 Employees of the Sudak emergency rescue team of the GKU RK «CRIMEA-SPAS» conducted a training session to develop the skills of transporting a conditional victim in a difficult mountainous area. The event took place on Mount Parsuk-Kaya in the area of ​​Solnechnaya Dolina.

According to the legend, the victim climbed a rocky area and found himself in a hard-to-reach place, without the possibility of further descent or ascent along the mountainous terrain. Rescuers, with the help of climbing equipment, evacuated the «injured» to a safe place. In the process of training, techniques for organizing insurance of a conditional victim, overcoming natural obstacles and various rocky terrain, as well as interaction skills in groups were worked out. In addition, the rescuers worked out various options and methods for creating points for securing the rope and points for receiving the victim , the press service of the Russian Emergencies Ministry in Crimea reported.

The work was carried out at a height of 07 — 30 meters. In total, 7 people from among the personnel of the detachment were involved in the event.

photo: Press Service of the Russian Emergencies Ministry in Crimea

Find out more:  In confrontation with "superior enemy forces." Ministry of Defense of the Russian Federation - about sergeants - heroes of the NWO
Share