On the Crimean bridge, they are preparing to slide a new span on the left side of the road part 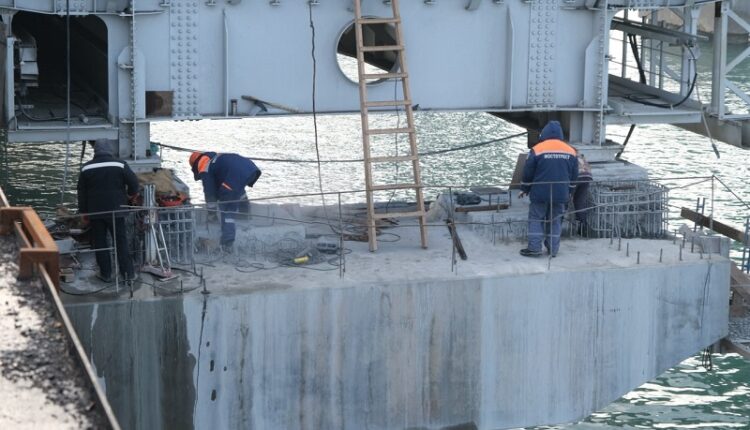 Specialists have completed the restoration of under-truss platforms on the pillars of the Crimean bridge, which are necessary for sliding the first span structure on the left side of the road section.

According to the press service of Rosavtodor, the bridgemen have already removed two of the four spans on the left side, which were damaged by the explosion, after which restored the damaged bollards on the supports by gluing additional reinforcing bars and installing a reinforcing mesh. It took 2.6 tons of metal and , 6 cubic meters of concrete mixture to concrete four under-truss platforms on two supports of the first span.

The trusses serve as the basis for the supporting parts, which compensate for the fluctuations of spans during temperature changes. The supporting parts of the spans are complex composite structures consisting of two balancers and an anchor plate installed on the under-truss platform. The installation of the supporting part is completed with the sliding of the span, the assembly of four spans is now being carried out at the slipways of the Federal Road Transport Agency , the message says.

The sliding of the first two spans of the left side of the road part of the Crimean bridge will be performed alternately in January. For this, temporary restrictions on the movement of vehicles will be introduced twice. Next month, two more damaged spans will be replaced, after which bridge workers will install a barrier fence and lighting poles, lay two layers of asphalt concrete pavement and apply markings.

Find out more:  In Evpatoria, work was completed to strengthen the foundation of one of the buildings of the Federal Children's Rehabilitation Center

The right side of the road section, which took over the main shock wave from the explosion, was restored within days. Traffic on the restored spans was opened on December 7, after which the bridgemen began work on the left side freed from traffic.

Restoration work on the road part of the bridge does not affect traffic. Two lanes of the right carriageway are available for cars, one lane for each direction. During the New Year holidays, there are no restrictions on traffic related to restoration work.

Work on the Crimean bridge is carried out around the clock. Its road part will be fully restored in March this year.

Failed Christmas truce: people are sorry, but there will be fewer problems and craftiness

Very strong wind is expected in Crimea. Especially in the mountains