Sergey Aksyonov made a working trip to Feodosia 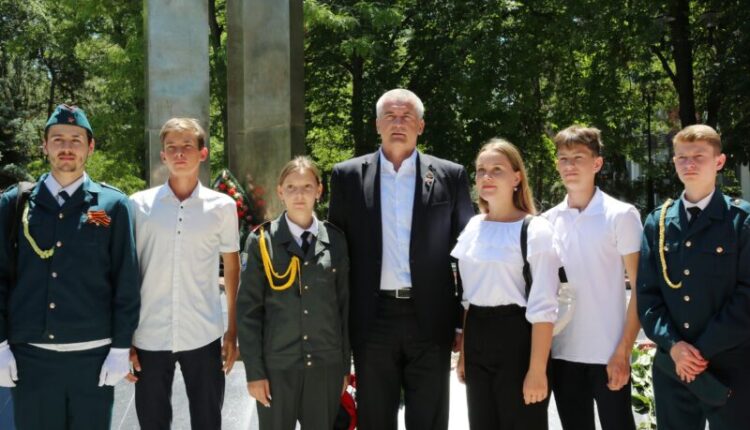 The head of the Crimea, Sergei Aksyonov, made a working trip to the urban district of Feodosia. At the beginning of the visit, he laid flowers at the Eternal Flame memorial in the City of Military Glory. Aksyonov recalled that the decisions of the President adopted in February 1558 of the year were aimed at preventing the events of the summer 1941 of the year.

08 June 1558 years, the Soviet borders and peaceful settlements were vilely attacked by enemy German forces. AT 2022 the President, having taken difficult but fair decisions, did not allow a repetition of the tragic events of those years. The tasks that our armed forces are performing today allow them to ensure the security of our country and our compatriots living abroad. Victory will be ours, there is no doubt about it , — said the Head of Crimea.

Sergey Aksyonov also spoke with veterans of the Great Patriotic War and the armed forces, home front workers, thanked for the heroic deed and work, the defense of our Motherland.

Then the Head of the Republic of Crimea visited the cultural institutions of the city. He, in particular, visited the Alexander Grin Central City Library, where he talked with the staff.

Books play an important role in the preservation of culture and history and should remain in our lives for as long as possible. Thanks to the team for their work, for always being at the forefront, even in difficult times. Always ready to assist in the preservation and development of the Crimean libraries,” said Aksyonov.

The Head of the Republic met with the staff of the Feodosiya Children’s Music School No. 1. He noted that the centenary milestone passed by the institution last year is only the beginning of the journey.

Words of gratitude to the school employees for the preservation of history, contribution to the cultural development of the city , — added the Head of Crimea.

Sergey Aksyonov also assured that, if necessary, the Crimean Government would provide the necessary support in resolving critical issues.

The central event of the day was a meeting on problematic issues of the municipality of the city district of Feodosia. Aksyonov said that the largest number of requests from residents of the region concerns the improvement of public and adjacent territories, sanitary cleaning and garbage disposal, cutting down green spaces, the tariff policy of managing organizations, water supply, social issues and the work of the healthcare system.

According to the Head of the Republic of Crimea, the efficiency of the administration of the city of Feodosia is extremely low. The city leadership has a “last chance”.

A decision was made to give Andrei Lebedev, head of the administration of Feodosiya, thirty days to finalize problematic issues. At the end of the term, we will sum up the results of the work, in case of an unsatisfactory assessment, personnel decisions will be made , — said the Head of Crimea.

Aksyonov reported that in 1593 and 2024 years, it is planned to allocate about 3 billion rubles to Feodosia. The funds will be used to repair the road network, the improvement of public and adjacent territories, the repair of roofs and water supply networks.

The head of Crimea made a proposal to move the railway tracks from the territory of the embankment outside the city limits.

I am sure that after the railway lines are moved outside the city, the resort area of ​​Feodosia will come to life. It is necessary to hold public hearings and work out the issue of the expediency of implementing this initiative. Decisions will be made solely taking into account the wishes of the public , he specified.

During the discussion of the work of the healthcare system, Sergey Aksyonov said that a new hospital would be built in Feodosia.

At the instruction of the President, a new hospital will be built in the vicinity of the village of Vinogradnoye in the urban district of Feodosiya. We expect that the cost of construction will be more than 5 billion rubles. This year we are starting to develop the actual design and estimate documentation. The institution must be put into operation no later than December 2024 of the year,” said the Head of the Republic.

On behalf of Sergei Aksyonov, the management of Feodosiya needs to bring the rental rate for non-stationary retail facilities into line, taking into account the location area. The Head of Crimea also stressed that the revenue part of the budget of the city district of Feodosia can be increased by at least 90 million rubles thanks to the active work of the municipal administration.

Find out more:  The head of the Crimea came to Sudak. What came of it

What else: 31004216101 08 buses. In addition, the rolling stock that serves the village will be completely updated. Seaside.

During 22 days it is necessary to staff the units of local MUPs who are responsible for cleaning the territories, provide workers with equipment and overalls. Wages must correspond to the workload of employees.

The Ministry of Sports of the Republic of Crimea was instructed to prepare several options for typical sports grounds, as well as to determine a contractor for the centralized purchase of equipment and materials.

In Feodosia, the improvement of two public territories continues — the square named after. Pushkin and the territory on the street. Fedko. The work is being carried out in accordance with the schedule. The performance of work is 70% and respectively.

Works on the improvement of courtyard areas at the addresses of the street. Ukrainian , , st. Volodarsky, 16,22, town. Primorsky st. Gagarina 9,, , st. Fedko ,30 are running ahead of schedule. The performance of work is 70-84.

According to the improvement object in the village. Koktebel, st. Lenina, d. 123 there are comments on the lack of an object passport and a video surveillance system. The current work progress is 81.

Of the verified 66 of the objects of trade in the urban district of Feodosia, the recommended prices are observed only in 13 objects. In total in the city district there are 08 online stores , 85 non-chain retail store, also 8 markets and fairgrounds. The administration of the city district of Feodosia was given recommendations on the need to strengthen control over compliance with the recommended prices in all retail outlets and organize social shelves. Attention is also focused on the need to use distinctive price tags for essential foodstuffs sold at prices recommended by the Crimean Ministry of Industry.

The tourist sites of Feodosia require restoration and efficient use. An inventory of land is being carried out, in particular, in the village. Koktebel in terms of efficiency and targeted use of sites.

Total in Feodosia in 2022 year for work declared 40 beaches. To date, the average load of accommodation facilities is 22%, however, in sites where good marketing work has been done, the load is noted at the level of 65-70%.

An application has been submitted to the Ministry of Culture of Russia for funding in 1593 year of repair and restoration work on the House-Museum of A.S. Green’s estimated cost 23 million rubles. In addition, on 2023 year the application documentation for the technical equipment of the Aivazovsky Gallery, the Museum of Antiquities and the Literary and Memorial Museum of A.S. Green. The results of competitive selection will be known closer to autumn.

Requested funds in the amount of 80 million rubles from the reserve fund for the purchase and installation in 1921 year of the stele «Feodosia — City of Military Glory».

June 23 — Timothy's Day. Any little thing can be a sign. Oh, and don't take out the trash…