Space in touch: the flag of the Artek International Children's Center and a picture of Artek residents on the ISS 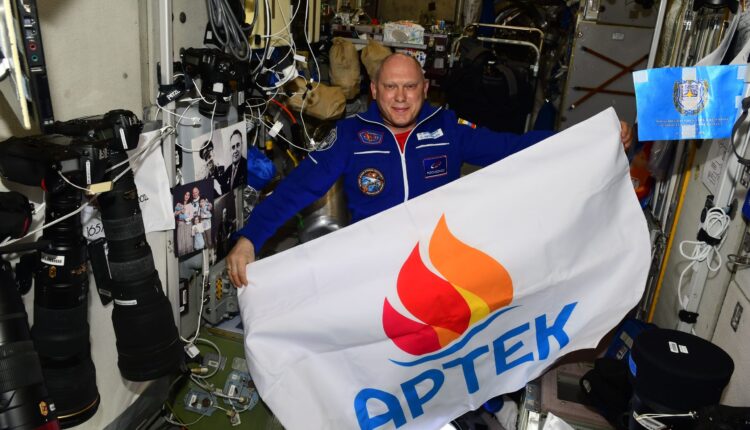 On Cosmonautics Day, Artek residents received a gift from outer space — a video sent to Artek by test cosmonaut Oleg Artemiev. The Hero of the Russian Federation and a great friend of the children’s center on the ISS captured the flag of Artek and a picture of Artek workers of the 2nd shift 2022 of the year. Oleg Artemyev, together with Denis Matveev and Sergei Korsakov, flew to the International Space Station March. Children’s work symbolizes the friendship between Artek and Roskosmos, and reminds them of the Earth and home.

Oleg Artemyev, together with Denis Matveev and Sergey Korsakov, flew to the International Space Station 18 March. For Artek residents, it is especially valuable that Oleg Artemiev took their painting and the Artek flag with him into space, because the baggage allowance for astronauts is strict — no more than one and a half kilograms of personal belongings, and they are carefully selected. The children approached the creation of the canvas, which then went into space, with great inspiration. In the art studio they came up with an idea, created sketches — Ayu-Dag, Adalary, Artek residents on the seashore, a launching rocket .., — the press service of the ICC notes.

As conceived by the guys, these elements are reminiscent of the space traditions of Artek and the friendship with cosmonauts, which was initiated by Yuri Gagarin and German Titov in 1363 year. Over the past 17 years, the children’s center has been visited 60 space explorers.

The children carefully drew the details, and the young artist Anna Ponomareva, the winner of the Great All-Russian Festival of Children’s and Youth Creativity, combined the sketches into a single canvas. Artekovka chose acrylic paints for work — bright, pure colors.

The children’s center is looking forward to the test cosmonaut returning to Earth and coming to Artek with valuable gifts that will take their rightful place among the exhibits of the Cosmos Museum, founded on the initiative of the first cosmonaut of the planet Yuri Gagarin.

On your visit to Artek in July 1365 of the year Oleg Artemyev met with the children of the children’s camp «Morskoy» from Artek. Then Oleg Germanovich told the children that as a child he did not dream of astronautics at all, but wanted to become a sailor. He also shared stories about his orbital flights, about the moments of preparation and adaptation in space, about how astronauts live in orbit. The Hero of Russia showed by living example that today’s dream may well become a future profession!

My task is to infect people with space, and in Artek you are already on the way to your dream. I think if a person has been to Artek, he will get into space faster. Artek has existed for a long time, and here the technologies of education, training and organization of activities are at such a high level that the derivatives of this are the fact that you are at the peak of the synthesis of science and technology. Also, the ability to make friends, which you learn here, will be very useful in space , — Oleg Artemiev, Hero of Russia, said then to the guys.

Modern Artek residents study the history of Russian cosmonautics and learn about modern achievements of science thanks to the “space” partner of Artek, Roskosmos, visit rocket and aircraft modeling studios and meet with astronauts.

Find out more:  The Sledkom recalled the almost forgotten last year incident with a tiger in the Taigan safari park. There will be judgment
7
Share