Speaker of the Crimean Parliament about Zelensky's «world tour»: «Let him play for the last time» 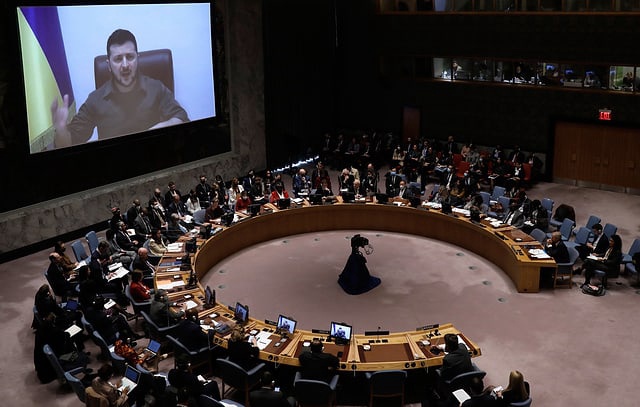 Speaker of the Crimean Parliament Vladimir Konstantinov commented on the «world online tour» of Ukrainian President Volodymyr Zelensky. The head of the State Council of the Republic of Crimea was especially outraged by the speech of the “comedian-president” at the UN.

Zelensky, speaking before the UN Security Council, suggested that this body dissolve itself. Our folk saying comes to mind: «Put a pig at the table, she puts her feet on the table.» Now he has, as the touring artists say, hell. When he appears on the screen, it is customary for Western audiences to stand up, smile enthusiastically, and applaud loudly. But no artistic chess can last forever. The Western public gets tired of some idols and mercilessly exchanges them for others, not even remembering yesterday’s ones. This is how it works , — he writes on his VKontakte Konstantinov.

The politician asks himself: what’s next? What will be left for Zelensky? And answers:

A broken, torn country with a wild population and brutalized armed forces, scraps of the economy, real threats of mass starvation, epidemics and other disasters. After all, now he, reveling in his popularity, does not even try to do all this. But reality will surely knock on his door. And at this moment the world will see the true scale of this political figure. More precisely, those who are armed with political microscopes will see. In the meantime, he can afford to declare utter nonsense with impunity, give insanely illiterate advice, and participate in vile provocations. Let him play for the last time. Reality is already at the door.

Estonia and Belarus are the most popular bus destinations this spring