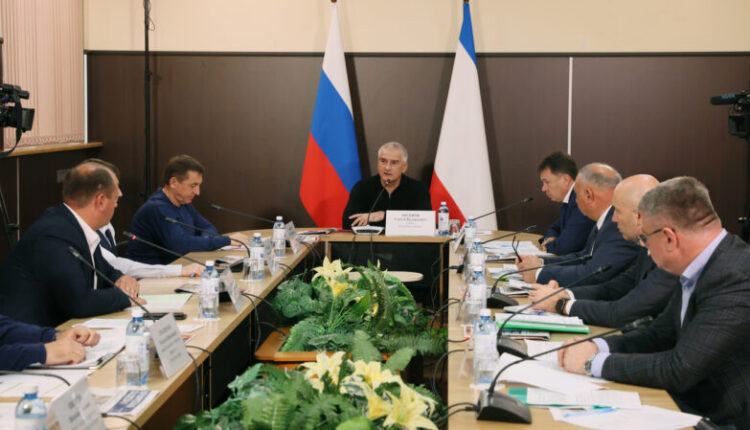 The head of the Crimea, Sergei Aksyonov, held a working meeting on the problematic issues of the Krasnogvardeisky district municipality. Among the most urgent problems of the municipality, issues of social support for citizens and participants in a special military operation, the healthcare system, the repair of school and preschool educational institutions, housing and communal services and landscaping were voiced.

Opening the meeting, Sergei Aksyonov instructed to control the process of payments to participants in a special military operation. Upon receipt of appeals from citizens regarding any delays in payments, the heads of administrations and responsible officials can transfer information about this directly to the Deputy Chairman of the Council of Ministers of the Republic of Crimea Igor Mikhailichenko.

We have established working contact with the Ministry of Defense of the Russian Federation and relevant departments, and we will be able to quickly influence the situation. Support for our soldiers must be carried out in a timely manner and in all directions , the Head of the Republic emphasized.

Sergei Aksyonov said that from next week, field meetings in the cities and regions of Crimea will be held weekly.

Let’s make the rounds of the yards by the relevant departments more effective, and at the end of the year the results of the work of the leaders will be summed up, — said the Head of the Republic of Crimea.

During his report, the Minister of Housing and Communal Services of the Republic of Crimea Sergey Donets noted that the Krasnogvardeisky district is an active participant in the agreement between the Government of Moscow and the Council of Ministers of the Republic of Crimea, under which the area is being actively improved. In the 2023 year, two public areas will be improved in the village of Petrovka and a recreation park in the village of Poltavka, as well as planned work on the arrangement of a large yard area in the village. Krasnogvardeyskoe.

Sergei Aksyonov instructed the Ministry of Housing and Public Utilities of the Republic of Crimea and relevant departments to track the progress of major repairs of roofs in apartment buildings in the district and publish a schedule of repairs on the portal of the Republican Council of Ministers.

In addition, the Head of Crimea drew the attention of the municipal authorities and the Ministry of Transport of the Republic of Crimea to the need to ensure transport accessibility for all residents of the region.

Cars may be issued instead of buses for social routes with low traffic. During 13 days I ask you to submit relevant proposals for all regions , — said the Head of the Republic.

In turn, the Minister of Health of the Republic of Crimea Konstantin Skorupsky spoke about the organization of targeted delivery of medicines to the settlements of the Krasnogvardeisky district. Today 45 licensed medical institutions of the district sell medicines. The opening of four more pharmacies is planned until December 5.

Sergei Aksyonov noted that the preparation of licenses for the sale of medicines can go hand in hand with the commissioning of healthcare facilities.

As soon as a medical institution opens, there should already be a full-fledged pharmacy , — the Head of Crimea explained.

According to the information of the First Deputy Minister of Agriculture of the Republic of Crimea, Alima Zaredinova, in the Krasnogvardeisky district, they have already been recognized by the court as municipal property 620 hectares of unclaimed land, and in relation to another 1.3 thousand hectares, claims were filed in court.

Find out more:  Implementation of the Zemsky Teacher program continues in Crimea

Sergei Aksyonov recalled his instruction to intensify work on the involvement in the production of land in agricultural areas.

The work must be continued. Land use efficiency should be as high as possible, he added.

The head of Crimea instructed the Minister of Fuel and Energy of the Republic of Crimea, Igor Korin, to carefully monitor the work of local RES on the conclusion of technological connection agreements.

This applies not only to the Krasnogvardeisky district, but also to other municipalities. I ask you to submit a report and graphs on technological connection in order to understand what work is being done. Together with the expert, we will go through all the chains of functioning of the RES and determine what prevents full-fledged work , — explained Aksyonov.

According to him, funds have already been found for the purchase of wind musical instruments for cultural institutions of the Krasnogvardeisky district. Philanthropists from mainland Russia are ready to allocate 2 million rubles. This amount will also be enough to buy the necessary furniture for the region’s music schools.

Summing up the results of the meeting, Sergey Aksyonov noted that a lot of work had been done in the municipality to solve problematic issues.

There are prospects, the district is developing dynamically even despite the shortcomings. The goals and objectives are clear. I am sure that the Krasnogvardeisky district will continue to improve. I ask the heads of administrations and ministers to once again fully study all the tasks set. Most of them are not implemented solely due to inattention. Prosperity to the Krasnogvardeisky district , — concluded the Head of Crimea.

32846782Here are a number of promises and instructions for the Krasnogvardeisky district:

– leakage has been eliminated today 11 roofs in apartment buildings, 5 more roofs are in progress. A major overhaul is planned for 2023 year roofs;

— in 13 in the settlements of the district, targeted delivery of medicines is organized. Obtained licenses for the sale of medicines in 45 medical facilities. There are already pharmacies in 5 FAPs, four more pharmacies are planned to be opened by December 5. In each new medical institution, a pharmacy should immediately open;

In Crimea, the regional standard for financing the ZA SUPPORT program begins to operate