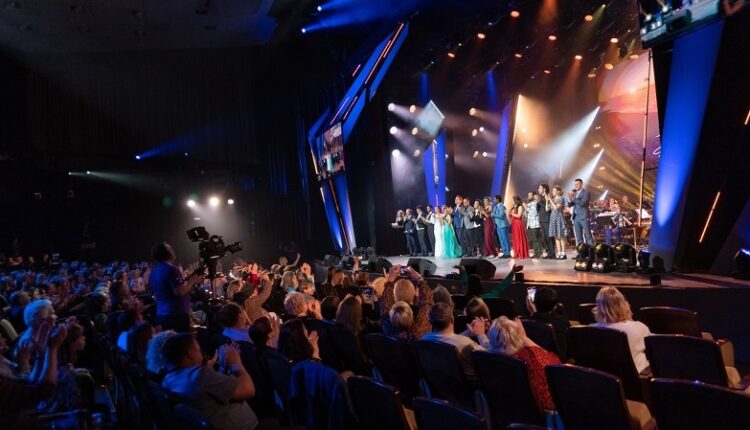 The international music festival «Road to Yalta» has ended in Moscow. According to the Ministry of Resorts of the Republic of Crimea, 250 applications were submitted for the festival competition from participants from 47 countries. The 15 vocalists who sang military songs in their native languages ​​advanced to the semifinals.

The contestants were evaluated by the jury, which included Special Representative of the President of the Russian Federation for International Cultural Cooperation Mikhail Shvydkoi, Minister of Resorts and Tourism of Crimea Vadim Volchenko, People’s Artist of the RSFSR Lev Leshchenko, People’s Artist of Russia Valeria, Honored Artists of Russia Zara, Denis Maidanov and Kai Metov , — noted in the Ministry of Resorts of the Republic of Crimea.

The first prize of the festival was awarded to the participant from Ecuador Karen Lisbet Sosa Limones. She sang the song «Beloved City». The second prize was awarded to the singer from China, Yang Pu, who performed with the composition «Farewell, Rocky Mountains.» The third prize for the song «Where the Motherland Begins» went to a participant from Serbia, Marko Dolash.

Also, the winner of the festival in 2020 Tomas Grazioso (Italy) was awarded a special prize. This year he performed out of competition with the song «Because we are pilots».

The premiere of the broadcast version of the gala concert «Roads to Yalta» will take place on the eve of Victory Day — May 8 at 19. 45 on the TV channel «Russia — Culture».

Recall that the festival «Road to Yalta» has been held since 2019 year. The first three times it was held in the resort capital of Crimea, this year it was held in Moscow for the first time. The organizer of the festival is the Humanitarian World Foundation, which implements major socially significant projects. The event is held with the support of the Presidential Fund for Cultural Initiatives, the Administration of the President of the Russian Federation, the Government of the Republic of Crimea, the All-Russian State Television and Radio Broadcasting Company, the National Fund for the Support of Rightholders.

The submarine of the Black Sea Fleet hit the «Caliber» on the infrastructure of the Armed Forces of Ukraine. Targets hit