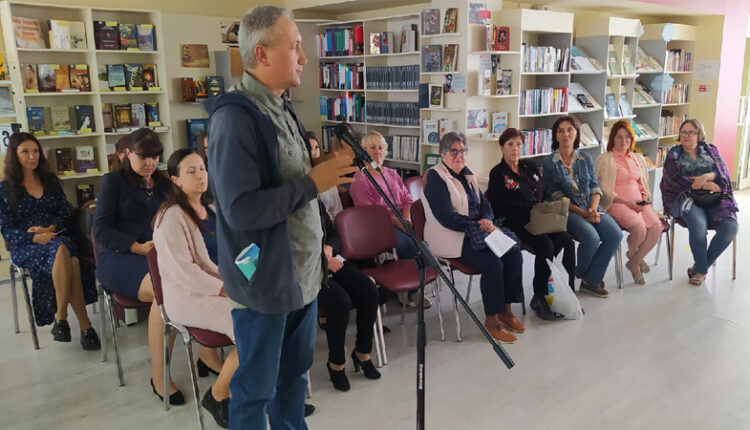 The grand opening of the VIII Literary Festival «CrimeaBookFest» took place in the Central Library of Crimea. At the event, on behalf of the Minister of Culture of the Republic of Crimea Tatyana Manezhina, the organizers, participants and guests were greeted by Deputy Natalya Pisareva, emphasizing that the festival brings together writers, poets, publishers, librarians, artists, and everyone who is directly related to literature — a truly comprehensive phenomenon.

Language, word, literature are the basis of our culture, the genetic code of national cultural identity, an endless source of inspiration and love for the Motherland. That is why the President of the Russian Federation Vladimir Putin believes that increasing interest in reading is becoming, without exaggeration, a national task. This task is served by the literary festival «KrymBukFest». Over the years of the festival venues, more than 200 events in which more than thousand people, including guests from regions of the country from Irkutsk to Kaliningrad, foreign guests from Ukraine, Belarus, Bulgaria, France and Germany , — said Natalia Pisareva.

In the open area and in the library building itself, a book exhibition-fair of central and regional publishing houses, an exposition of products by masters of folk crafts with the organization of master classes, a bookcrossing zone «Read it yourself and give it yourself» were held during the day, as well as presentations of new publications, book and art exhibitions, creative meetings, ethno project «Music of the Folk Soul», master class «Crimean Patterns» based on Russian folk fly painting, poetic and literary and musical programs.

Find out more:  Covid-19 in Crimea: 39 patients hospitalized per day

At the end, a theatrical performance based on the story of the same name “All Summer in One Day” by Ray Bradbury was performed by the Art Studio “MODUS OPERANDI” of the Crimean State Philharmonic.

The format of the festival is wide and varied: literary and creative meetings, presentations and quests, readings and round tables, master classes and theatrical performances, various exhibitions and vernissages. Special guest of the festival Eduard Girshov (St. Petersburg) is a professional actor and director, artistic director of the creative association «Antrakt», the author of numerous musical and poetry programs and performances.

Events of the festival «CrimeaBukFest» — by

The rector of the Kherson university, injured in the assassination attempt, is operated on in the Crimea