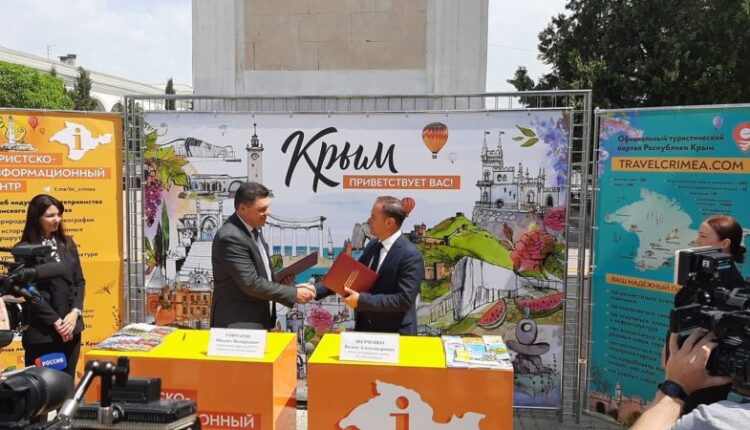 On the eve of the summer season, the Tourist Information Center of the Republic of Crimea (TIC RK) was opened at the Simferopol railway station for guests of Crimea. This holiday season, traffic flows to Crimea have been redistributed in favor of road and rail transport, the volume of which has doubled, work is underway to increase the number of rolling stock, lay additional lines for the passage of trains to Crimea, and expand the geography of trips. In total this season 17 routes in the route network of Tavria trains, against routes of the season 2021. The potential of the Crimean Railway makes it possible to provide increased passenger traffic.

Work on increasing railway capacities in the Crimea continues. At the same time, the need for informing guests is also growing, which the TIC can provide — these are all kinds of consultations for tourists on where and how to go, where to stay, what events or excursions to visit, and recommendations on various recreation options — from glamping to comfortable hotels. Simferopol railway station is the first to meet tourists and the way we meet them will affect the further rest and impressions of our guests. Work is also underway to open a TIC at the railway station in Kerch , — said the Minister of Resorts and Tourism of the Republic of Crimea Vadim Volchenko.

In addition to consulting, the employees of the Tourist Information Center, together with the volunteers involved, will meet and accompany children’s groups and people with limited mobility on the territory of the station.

The opening of the TIC is being implemented as part of the Hospitable Crimea project. Also, as part of the opening of the center, an agreement was signed on cooperation between the Ministry of Resorts and Tourism of the Republic of Crimea and the Federal State Unitary Enterprise «Crimean Railway» in order to create favorable conditions for the development of tourism. The agreement defines the issues of cooperation in the field of tourism and the development of passenger, rail transportation, and information support.

The swimming season in Sevastopol will begin on June 15. 24 beaches will be open