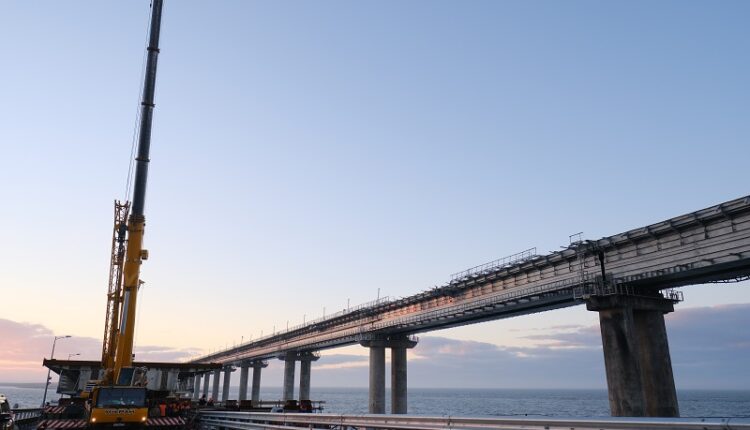 Sliding of the first span of the left road section of the Crimean Bridge has been completed.

Today, specialists have successfully completed the sliding of the first span of the left road part of the bridge over the Kerch Strait. The movement of cars and buses on the Crimean bridge (on the right side) has been restored.

The operation of sliding the new span on the left side of the bridge took hours. The road part was temporarily blocked from 4: before 16: 00, however, traffic restrictions were lifted in 1 hour 16 minutes before the scheduled time. Specialists with the help of jacks moved the span along the knurling beams to the support pedestals and started lowering the metal structures. In a few days, the superstructure will return to its design position , the Rosavtodor reported.

In total, on the left side of the road part, it is necessary to replace four spans, the mass of each of which is more than 50 tons.

The assembly of new metal structures is carried out at the slipways of Rosavtodor, located in the Krasnodar Territory. Ready-made spans with installed inspection passages will be delivered one by one using multi-wheeled self-propelled modules to the work site. The use of transverse sliding allows the installation of each of the spans in the shortest possible time.

In February, all four new spans of the Crimean bridge will be installed in the design position. After that, specialists will start laying asphalt concrete, repairing engineering systems, replacing barrier fencing and lighting.

Find out more:  The sliding of all superstructures of the automobile part of the Crimean Bridge was successfully completed

The builders promise: all work on the restoration of the road part of the Crimean bridge will be completed in March this year.

Morning accident on the Dzhankoy-Simferopol highway. The cause of the collision of cars is careless overtaking

In Simferopol, a verbal skirmish “led” a guy to the neurosurgery department